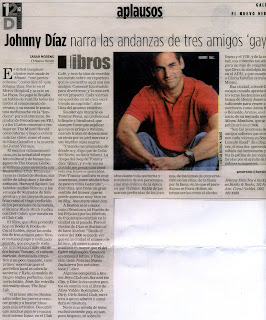 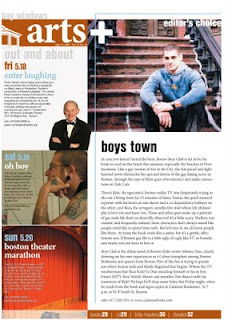 "When Tommy relocates from Miami to Boston for a reporting gig at the local paper, he brings the heat with him in this frothy beach read. In his first novel, Boston Globe reporter Johnny Diaz peppers his tale of three guys looking for fun with plenty of winks and nudges at the current scene. It's a charming cocktail.'' OUT magazine

"Same-Sex and The City. In Boston Boys Club, the former reporter for The Miami Herald and current staff writer for The Boston Globe follows a trio of friends as they search for that perfect guy at an ultrahip boy bar in Boston, Club Cafe...his goal is to create archetypal characters who tug on the heartstrings and tap into that always universal search for love." The Advocate 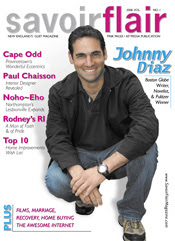 
"Boston Boys Club will make for great summer beach reading, and one hopes that the author will grace readers again with another story of New England's favorite city.'' Afterelton.com


"The novel is lovely, fun, well-written and a great page-turner. I was floored by the beauty and courage of it. I was also charmed once more by Johnny's quiet power, and his understated charm." Alisa Valdes-Rodriguez, New York Times bestselling author of The Dirty Girls Social Club


"Boston Boys Club is racy, funny, and smart. With his unforgettable trio of narrators, Johnny Diaz ushers the reader through the sex-filled, weirdly skewed world of contemporary gay Boston. You're going to love this book." Scott Heim, author of Mysterious Skin and We Disappear

"Chic lit had to make way for chica lit and I'm glad to say that the ground for chico lit is being broken by Johnny Diaz and his own tale of the city, filled with hot boy on boy sex, friendship, romance...There are issues and illnesses, losses and things falling apart. But in the end, things come together and these boys will win your heart.'' Lisa Alvarado, Blogcritics.org, Boston.com


"Filled with love, laughs and pop culture references, Boston Boys Club is boyfriend fiction that keeps you turning pages to find out who’s going to wake up next to whom!" Insight Out Books