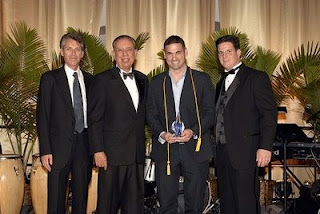 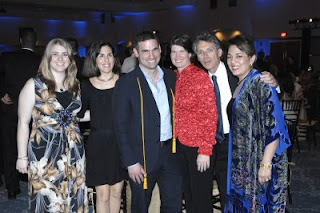 I wanted to thank Florida International University (FIU, my alma mater) for honoring me Saturday night with their prestigious Torch Award. I was really flattered when I learned earlier this year that I was the chosen recipient of this award for the school of journalism.

On Saturday night, a reception and awards ceremony were held at the school's South campus in southwest Miami Dade.
( In the awards video below, I come up at the 3:16 mark, receiving my award)

I flew down from Boston for the event wondering what to expect. Am I going to have to give a speech? Will I have to pose like Lady Liberty with my award? Luckily, all I had to do was show up with a big smile and my pin-striped suit from Banana Republic.

The night began with a lovely reception at the home of FIU president Modesto Madique on the south campus where I took a photograph with the 11 other award recipients, each representing one of the schools at FIU. Afterward, we were shuttled in various new Volkswagen models (the night was cosponsored by a local VW dealership) to the school's banquet hall where a dinner and ceremony awaited. I invited my sister Cary to accompany me to the event. I thought she'd enjoy the free surf and turf dinner and glasses of wine. (And she did!) We both enjoyed marveling the various VWs parked in front of the banquet hall. (We were partial to the VW Eos, the new convertible that we were chauffeured in but that's another story.)

Wearing a bright yellow tight-fitting dress, Syesha, last season's American Idol third place finisher and a fellow FIU graduate, performed two songs with a 10 piece orchestra. Then the awards were handed out. At table 17, my sister and I sat back and watched the small parade of recipients as we munched on the sirloin steak, grilled fish, mashed potatoes and vegetables.

When my name was called, everyone at my table (representing the school of journalism) cheered and hollered as I gingerly and proudly walked onto the stage. As a mini biography was read outloud, I smiled and shook president Madique's hand who then handed me my award: a small glass statue in the shape of a flame. I posed with the president for a few photos in front of 400 people. As I descended the stage, some tables cheered "BOSTON! BOSTON! WHOO HOO" and "OYE! Congratulations Johnny." 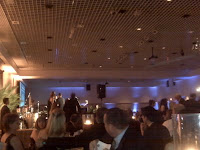 It was such a great and humbling feeling, to be recognized by my university for the work I've done at The Miami Herald, the Globe and in the world of gay Hispanic fiction. I didn't realize anyone was paying attention back at good old FIU. I graduated from there many moons ago (1996). At the time, I shuttled back and forth from North and South campuses in my little old Toyota Tercel hatchback which led to an early automotive grave. When I wasn't at FIU, I was interning part-time at The Miami Herald where I wrote for the Hialeah and Kendall Neighbors editions.
I was always on the go, writing my heart out.

During Saturday's elegant gala, I sat at the table, absorbing the scene and cradling my award (which looks like a glass Hershey's kiss.) I beamed with pride.

I don't know who took the time to fill out three pages to nominate me for this award but I wanted to send a heartfelt thank you for thinking of me. The award was the best birthday gift I received last weekend. It's a day I will never forget.

(Photo high above features me with FIU president Modesto Madique as I receive the award. Second photo: far right is FIU student ambassador Daniela Ottati, then my sister Cary Diaz. To my right is FIU journalism professor Elizabeth Marsh, associate dean Allan Richards and Dr. Nane Cheung.
Middle photo is of me accepting my award on stage. It was taken by my sister with her blackberry.)
Posted by Johnny Diaz at 10:20 PM