The papers are signed. The deal is done. I no longer own my home in Boston. Home. It's a word that I’ve had to redefine in this new year. For 10 years, home was Boston where I first lived just outside of Harvard Square in Cambridge before moving to my own condo in Boston's Dorchester neighborhood. I was one of those many pilgrims to move to Dorchester or what was affectionally called "DOT" to begin a new chapter as a home owner and writer. Immediately, I was moved by this urban/suburban village. The small orange trolley that rumbled by.

The small nearby main street was home to new restaurants, coffee shops and antique stores -- all a brisk walk away.
I was proud to say that I lived around the corner from the old Walter Baker Chocolate Factories which once perfumed the neighborhood with a succulent chocolate aroma. (At least that's why my neighbors recalled.)

I was so moved by my neighborhood, called Lower Mills, that I weaved its scenery into my fiction: Boston Boys Club and Beantown Cubans.
Today, home is my old home, my parent's house in mid-Miami Beach where I first learned to drive, where I began writing at The Miami Herald when I was 16, where I came out, where I wrote my poems and short stories when I wasn't at FIU or The Herald. I've become a home boy or mammone, someone who still lives at home with his parents.

My bedroom here still looks like my old room and yet it doesn't feel the same way. As welcoming my parents and my sister have made my return home, I sometimes find myself emotionally and physically caught between two places. Some nights, I awaken to get some water and I still think that I'm in my condo in Boston. (That has led me to walk into some walls.) Turning the lights instantly brings me back to my Miami reality (as I scratch my head wondering, this isn't Boston?) It's the small things that I miss about Boston: waking up on a Saturday morning to watch one of my movie rentals with a Dunkin Donuts iced caramel coffee that I bought down the street. Wide awake by midday, I ventured to the nearby Blue Hills for my weekend hike.

I miss driving down to Providence for walks along Blackstone Boulevard and downtown. (I'm a big walker.) I miss my friends in Beantown. I also miss having 850 square-feet to myself.

I decided to move back to South Florida for a new job. I wanted to hit the ground running so I relocated to my parent's house for the time being until I figure out where I want to repot myself.

It's a humbling experience to pack up your belongings into your Jeep and then take a one-way 1,400 mile trip back to your childhood home. Sometimes, I feel like I’m in a real estate inbetween. I'm in my childhood home but that time in my life has passed. This room represents my old life but now it also represents how I should be moving onto a new one, which will happen eventually. I’m a floater, not here or there, untethered, nowhere but yet happy to be starting anew at the same time.

I can’t complain and have embraced my new but old surroundings. My dad greets me each morning with buttered toast. As soon as I get home from my 45-50-minute commute from Fort Lauderdale, he prepares grilled chicken and rice for me. My room is also in the front of the house so I have some semblance of privacy (until my parent's and sister barge in unannounced which happens regularly. I've learned to get dressed in the bathroom, just in case.)
Being back in Miami has also been a big game of catch-up. So much has changed. Downtown Miami marches on, a line of neon-lighted highrises that dot the night skyline like the virtual world of Tron Legacy.
Wynwood - once the home of drug dealers and hookers - is actually cool, artsy and welcoming. I find myself eating quesadillas there in Midtown Sunday afternoons or visiting the Target there for my weekly People magazine reads. (Barnes and Noble isn't nearby for a quick trip.) And a quarter buys you only ten minutes worth of parking in Miami Beach. Que cosa?

Instead of hiking every weekend as I did in Boston, I now take long relaxing weekend walks in Miami's Coconut Grove along Bayshore Drive where the bay's cool breeze greets me. I also trek under the canopy of old towering banyan trees along old Main Highway where I pass joggers and dogwalkers. Along the way, I enjoy marveling at the grand old Miami homes, churches and private schools. But then what's up with those annoying speedbumps every 200 feet on Prairie Avenue, Las Gorce and Pine Tree Drive in mid-Beach which makes driving akin to an obstacle course? I'm glad I have a Jeep on these roads. 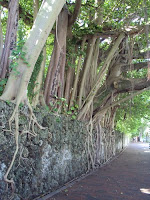 >What is it about Miami that keeps so many of us rooted here like the palm trees that
dot South Beach or the saw grass that decorates the Everglades? When I am out and about, I sometimes see some old high school classmates and college friends who have stayed here after graduation.

Is it the Cuban-Latin emotional umbilical cord which keeps us rooted to the 305 as rapper Pitbull would say. Have any of you ever felt caught between two homes? Can we have more than one? I think so. 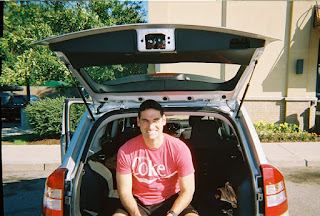 (The top photo was of my condo in Boston. Those were my flowers too!)
Posted by Johnny Diaz at 11:58 AM