Oye, do you know other gay Cuban (or gay friendly Cuban writers?)

It's a question that comes up in conversation whenever I talk about my writing: "Do you know of any other gay Cuban authors?"

Peripherally, I knew of some.  But with gay-Cuban-writer trending the past few weeks thanks to Richard Blanco (a kindred spirit) who had the honor to write and read an original poem at President Barack Obama's inauguration, I wanted to compile a list of some of the other gay Cuban writers (or Cuban writers who have been gay friendly in their fiction) whom I've encountered in my readings and travels.

If you try and google gay and Cubans as search terms, you're sent all over the cyber map or to gay porn sites. This was one of the reasons I've wrote Boston Boys Club, Miami Manhunt, Beantown Cubans, Take the Lead and its Spanish version Tomar La Iniciativa - to write fun and light-hearted stories of being a young and gay Cuban professional in Boston or Miami because there are so few of us out there in the literary world writing our stories. And let's face it, this isn't a frequent topic that the older Cubans love to discuss while ordering their cortaditos at the cafecito at the counter at Versailles in Miami.

So here are some gay Cuban authors or gay-friendly Cuban ones that I know of because I've read them, met them in person or via email or simply heard about them through the Cuban literary grapevine.

If you know of any others, let me know by commenting below or emailing me: johnnydiaz@aol.com

Achy Obejas: She's a former Chicago Tribune arts and culture writer who has penned several books, mainly short story compilations, of being lesbian, gay and Cuban. One of my favorite books of hers is titled We Came All The Way from Cuba So You Can Dress Like That? The line comes from the abuela of one of the characters who is criticizing her lebsian nieta for dressing so casually as she prepares to go out one night. Her other books include Memory Mambo. Achy also edited Havana Noir, a collection of mystery tales set in Cuba and published last year. She translated Junot Diaz's best-selling The Brief Wondrous Life of Oscar Wao in Spanish.  The day I meet her in prson, I'd like to tell Achy, "I Came All The Way From Miami So You Can Dress Like That?" Hopefully, she won't throw a book at me. 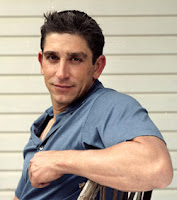 Richard Blanco: Do I need to really explain this one? Just in case: This hunky Cuban poet studied to be an engineer in Miami and began working as one when the power of the pen seductively whispered his name. He has written books of poety such as City of Hundred Fires and Directions to the Beach of the Dead and Looking for The Gulf Motel. His writing often examines the intersection of the hyphen between Cuban and American, where does one's cultural identity begin and end and is it bounded by geography when you are born in one place and grow up in another? I've actually met Richard in Miami a few times (and he kindly gave me a copy of his Cienfuegos book and signed it.) His writing is as intense as his good-looks. 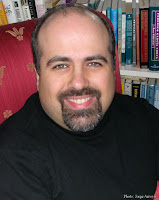 Rafael Campo: Rafael Campo is an associate professor of medicine at Harvard University and a Boston doctor who specializes in Hispanics, gays, lesbians, transgendered and HIV infections. He turned to writing poetry and short stories as an outlet to deal with the duality of wearing a white coat at the hospital and being a gay Cuban American. Since the 1990s, he has published several books of poems and short stories including The Other Man Was Me, The Healing Art: A Doctor's Black Bag of Poetry, and his most recent book, The Enemy. Campo prescribes "bibliotherapy," which means using reading and writing to help patients heal their souls as much as the body from their illnesses. He encourages his patients to read and write so that they may have a better understanding of their illnesses. Consider his writing Chicken Soup for the Patient's Soul but with depth and poetic grace. 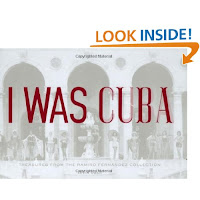 David Valdes Greenwood: This Mambobean (as he calls himself) has written two books that explore his life as a half Cuban, Maine-bred gay man. The first was 2007's Homodomesticus, in which he chronicled his journey of finding his partner, marrying him and then adopting a baby girl. He followed that with A Little Fruitcake, a collection of short stories that reflect on the holidays with his family in Miami and Maine. He also published A Little Fruitcake the Rhinestone Sisterhood. His writing is humorous but tender, a celebration of love and family. Valdes Greenwood lives in Massachusetts and teaches writing at Tufts University.

Jorge Luis Seco is an Havana-born New Jersey writer and poet. He has self-published two novels:  Donde Tu Ere Mi Sol which was then translated in English as The Only Sun I Need.  He has also published a bilingual book of poetry called From the other shore - Desde la otra orilla and another novel Cuba: Solo Para Turistas.  His writing has a poetic lyrical touch and explores the gay Cuban dynamic from the island to the US.

Fabiola Santiago is a Miami Herald columnist and former visual arts writer but she's also an author. Her debut novel, Reclaiming Paris, followed a Cuban art curator named Marisol as she searched for herself while navigating her various lovers often associated with the different perfumes Marisol wore. Although Fabiola is straight, this Cubana has written about gay issues and gay people in the newspaper including her reunion with a her longtime childhood friend at a local Miami hair salon. Her novel had a sweet but tough-talking gay character named Alejo, who croons with Marisol at the fictional Dos Gardenias restaurant in Miami's Little Havana. It's the Alejo character who explains to Marisol the true nature of men, whether they are gay or straight, corazon!  I enjoyed her novel so much that I wrote a review on it when I was a reporter at The Boston Globe.

Alisa Valdes-Rodriguez: Okay, she's not gay either but she does include gay and bisexual Latina characters in her novels so that's good enough in my book for this unofficial  list. Alisa is a Cuban-American and Irish writer, former Boston Globe reporter (I remember when I was a summer intern, she would furiously type away in her pink hoodie and sweat pants at her desk after teaching aerobics.) She's better known as the queen of Chica Lit and more recently as feminist memorist. In her debut novel, The Dirty Girls Social Club, one of her six Latina narrators is a gay Colombian TV reporter named Elizabeth. Through this character, Alisa explores the complexities of being a gay black Latina in Boston. In her sequel, Dirty Girls On Top, Alisa invites her readers to catch up with the six sucias (as they are called) five years later. Among them is Elizabeth, as she struggles with being a lesbian mother of a newborn while having a lackluster lover who doesn't appreciate her or her baby boy. Lauren, the other sucia who is a Cuban-American Boston newspaper columnist, also explores bisexuality in the sequel  during her journey of self-acceptance. Here is a Boston Globe review I wrote about her third novel Make Him Look Good which was set in Miami and also has a funny lesbian reporter character named Lilia.