In honor of the new Star Trek movie Into Darkness which I saw this past weekend, I thought I'd repost a blog entry about how the Enterprise and crew beamed into my life.

A lot of my friends and readers have been surprised to learn this year that I'm a diehard Star Trek fan. (I hate the word Trekkie.) I never talked about it because Trek fans get such a bad (read:geeky) rap so I always kept it on the down low. But with the release of my fourth novel, Take the Lead, I've been slowly coming out as a wanna-be member of the Enterprise crew because like me, the main character in the book loves Star Trek and Gabriel references several episodes and characters as he narrates his story. (The walls of his fictional apartment in Quincy are covered with Star Trek cast posters.)

My interest in the show began when I was a kid in Miami Beach. I always saw the original show with Kirk, Spock, Bones, Uhura, Scotty and Sulu on reruns on Miami's WCIX-TV (Channel 6). When the crew embarked onto the silver screen with Star Trek: The Motion Picture, I followed them there (at least on cable because I was too young to go the movies.) But it wasn't until junior high that the show sunk its hooks into me like a tractor beam. From then on, my interest in the program boldly soared. On Memorial Day weekends, WCIX would air day-long Star Trek marathons which allowed me to have a better understanding of the show and its message. I would sit glued in my Miami Beach childhood bedroom where I watched back-to-back adventures of starship NCC- 1701. For me, it wasn't so much about the limited special effects (photon torpedoes, phasers, beaming up and down from the various colorful alien planets) although I did enjoy seeing these effects. 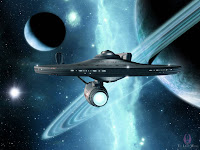 Rather, the characters were the strongest appeal of show. Whether it was the series or the films, it was fun watching these characters discover something new about each other each week. I enjoyed their light-hearted banter and the chemistry between actors. They were a family, a group of friends in good and bad times. I wished I had had that at Nautilus Junior High when I began to realize that I was different from my other classmates, that I was gay. I did have a big Cuban family but I didn't have a tight group of friends to hang out with on weekends, to go to the movies at the Byron Carlyle theater or to shop at the ever-popular Aventura Mall. I was pretty much a loner, riding my orange ten-speed bike in mid-Miami Beach on weekday afternoons and weekends hoping for some company from anybody from school I might bump into. I was secretly hoping for my own starship wingman, my tween Mr. Spock.

Although I had friends in school, they were just that at the time - classmates. Nothing really happened outside of school except studying for honors Algebra, honors Geometry or helping one or two classmates with their English essays. Sometimes I pretended that I needed help with my math just to hang out. I always wanted to go to the movies with them or hang out at the mall but they were girls and had girl things to talk about such as boys and other monthly-related girly things and I wasn't part of that conversation. even though I desperately wanted to share with them which guys I thought were cute too. I didn't have any guy friends at the time either. I tried opening up a hailing frequency but my messages went unanswered.

So there I was, sitting on my twin bed, escaping to the Enterprise, wishing I was onboard and on a voyage with my own Spock, Bones, Uhura. Friends. Community.
I remember that year, I had a Star Trek calendar, marking off the date to the premiere of the new movie, Star Trek IV: The Voyage Home (better known as the humpback whale movie.)

I remember how excited I was to watch the cast on the red carpet premiere on Entertainment Tonight. I felt like I knew the cast. They were my long-distance friends and I was happy for their 20th anniversary since the show's debut.
My love for Star Trek cruised into high school, particularly freshman year with the debut of Star Trek: The Next Generation. I had to be home at 7 p.m. Saturday nights to watch this new crew continue its ongoing mission of the original series. I wanted to be like the teen starship savant Wesley Crusher who was about my age and became part of the missions and helped in any way that he could. Dammit, he got to wear the uniform and hang out on that ship. (okay, Hollywood set.) Every weekend, my mom would bring me a cheeseburger, fries and chocolate shake from my dad's job at Puerto Sagua restaurant in South Beach. I would sit down in the living room and watch the show with glee and talk back to the characters."Make it so!" or "Blow the Borg out of the galaxy, Picard!" Yes, the show was the highlight of my weekends and my week.

Eventually, I got my driver's license, bought my first car (a used light-blue Honda Accord hatchback) and began interning at The Miami Herald at 16. I finally created my own circle of friends but I couldn't outrun (out-fly?) my love for Next Generation. I also discovered Deep Space Nine in college and then tuned into Voyager. No matter what stage I was in life, I couldn't escape my fondness for my extended Star Trek familia. When the Next Generation cast made the leap to the big screen in 1996 in First Contact, I was there too in the theater and on those other Friday nights for each of the following movie premieres. This happened as recent as May 2009 when the latest Star Trek movie opened here in Boston. I remember sitting mid-row, munching on popcorn in the theater where I was all giggly and giddy, as the familiar theme music played. For me, that introductory music was akin to a feel-good pop song.

Although I've never lost the appeal for the show/movies, I just never shared it outloud with anyone, not my friends, my boyfriends or co-workers at The Miami Herald where I first started my journalism career. (There were hints though: I had a keychain shaped like a Star Trek communicator and I had a bumper sticker that read: STARFLEET ACADEMY.) Being a Star Trek fan was my own little secret and one that I've finally decided to finally come out and share with others. Still, I continue my search for my Spock. And it turns out, he's one of us afterall.

In that spirit, I am posting a small feature I wrote during my first-year as a full-time general assigment reporter at The Miami Herald's Broward city desk in Hollywood, Florida. Saturdays were considered slow news days, meaning that if there wasn't a shooting, robbery, drowning, murder, plane crash, hurricane or flood to cover, we'd write about a local festival or unique community event for that Sunday paper. (I loved working Saturdays back then with my boots-wearing-way-too-cool-and-fashionable-to-be-an editor Julie Gallego and fellow medical writer extraordinaire Shari Rudavsky. We were the Saturday crew for a while.) In August 1997, there was a mini-Star Trek event at one of the Broward county libraries and I gladly volunteered to do the feature (I always preferred features to hard news.) I extracted the story from The Miami Herald archives this week. Enjoy! I surely did then and now.

She goes by the name (if you humans can pronounce it) Katmai Tai-Lorrenssith.

``Katmai is my given name, Lorrenssith is my family name,'' says the 29-year-old Fort Lauderdale Klingon, with her bumpy forehead and wide nose. She wears a dagger at her side.

``I am with the ship Jangral,'' she adds before breaking into a grunting warrior song with fellow Klingons standing guard at the Klingon Embassy -- in Pembroke Pines.

It was stationed at Trek Happenings V, a mini- Star Trek Saturday at the South Regional Library.

For Trekkies, the library was transformed into Starbase TH 5, with a main bridge, holodeck, even an Area 51 (the maybe mythical place in the southwestern desert where it's believed the U.S. government keeps all the aliens it has trapped).

At the happening, fully armored Klingons roamed the base (peacefully) with Starfleet members. If you looked closely enough, you might have seen a Romulan or two.

The Klingons, like Christina Moeller (Katmai Tai-Lorrenssith), are crew members of the ship Jangral. They make up KLAW, Klingon Legion Of Assault Warriors. Like their Starfleet counterparts from the USS Triumph, they perform community service projects in Broward.

For example, anyone who entered the Klingon Embassy was asked to donate $1, which went to the library.

Besides Star Trek displays that featured past and present (or is that future?) cast members' bios and panel discussions with aliens on whether there really is life out there, the Klingon Embassy seemed to be the star attraction.

Walk inside the dark room and a Klingon, in our case Moeller, takes you where no one has gone before. (Sorry, we had to go there.)

There's a warrior table, featuring the Klingon weapons used in battle as well as enemy phasers, prizes of war.

Another display shows Klingon pets such as a Targ, a cross between a furry dog and a little boar.

A few feet away, there is a ``nontoxic to human'' buffet of Klingon food, with a plate of mustard-yellow slime worms and a human heart (made of Jell-O).

``He was a good fight but no match,'' says Moeller, slurping a chunk of the heart.
Posted by Johnny Diaz at 5:25 PM