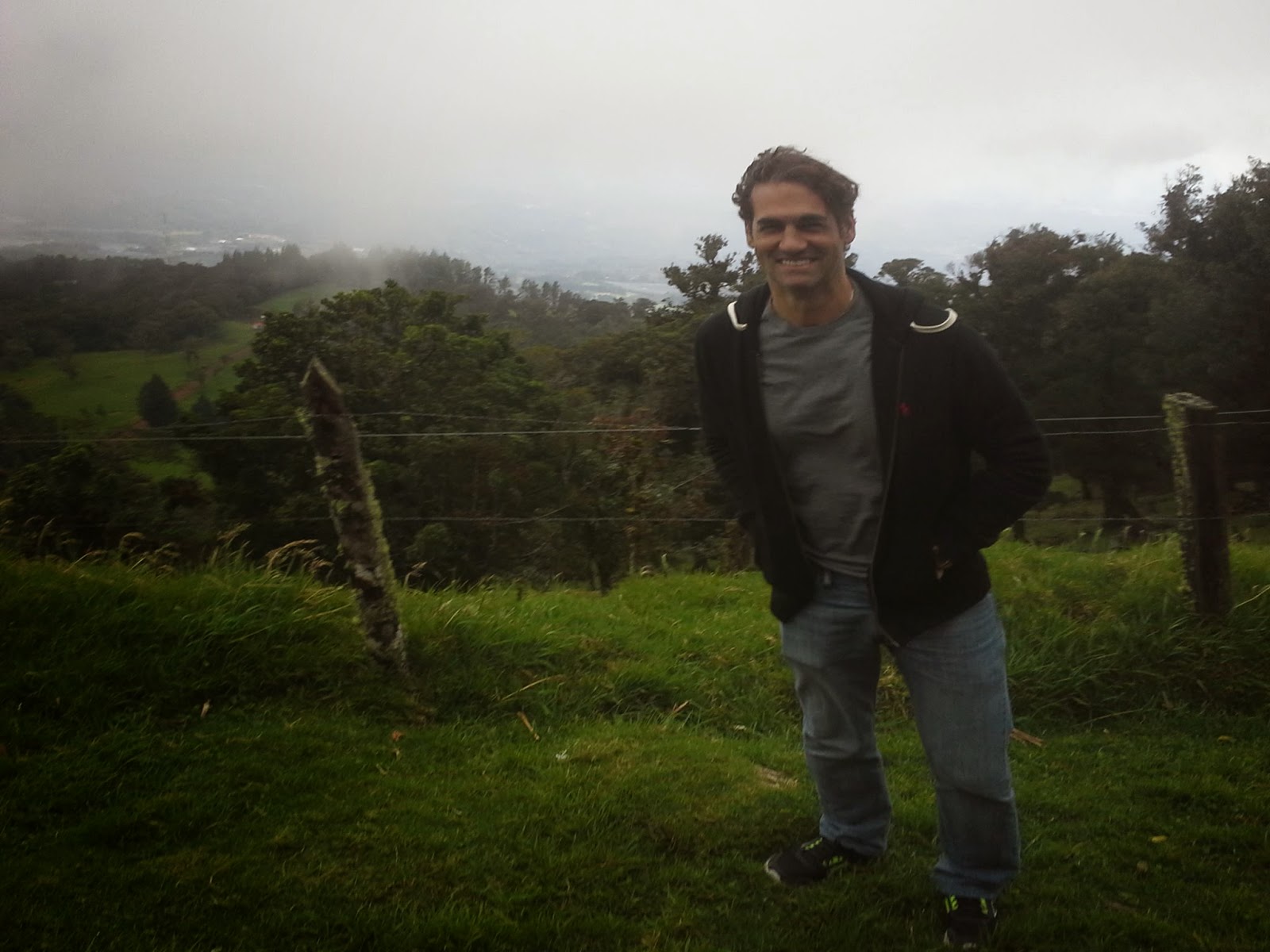 "Oh....my...GOD!" I kept saying out loud, as we drove up, up and up the winding curvy mountain road in Costa Rica.

"There are no guardrails!" I continued, looking beyond the road's edge inches away. I tightly gripped the frame of our rented Hyundai SUV and just held on. But once I got over my fear of heights (and I let go of being a backseat driver on these narrow roads) I enjoyed the view and it was quite a stunner. The rolling plantations of coffee trees that unfolded like a fabrics of green and brown. The cloud-covered peaks of trees in the near distance. The sight of black and white spotted cows that happily lingered and munched on acres of land. The central valley capital of San Jose unspooled below where small tiny dots of cars (mostly 1990s Toyota Tercels and Nissan Sentras) descended the sloped city streets.

After years of flying back and forth between Miami-Boston-Providence to visit family and friends, I finally dusted off my passport and changed up my travel itinerary. 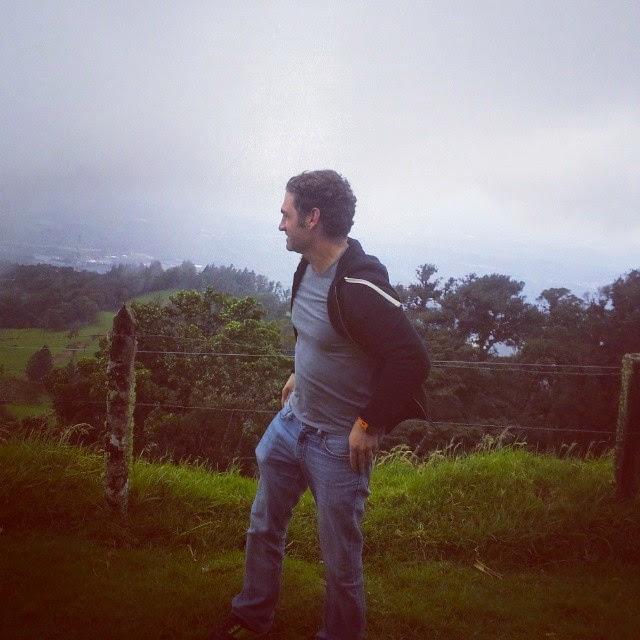 I wanted to experience some place different, break out of my routine (an ongoing goal of mine). But I ventured to Costa Rica for another good reason. I wanted to see where my boo (let's call him Leaf because he's private like that) was from. To better understand someone, it's not enough to speak their language and listen to their stories and experiences. You need to see where they're from because our hometowns beat and reside within all of us and say so much about who we are. Mine happens to be Miami (and then Boston.) I wanted to experience Costa Rica through his olive-green eyes. In fact, Costa Rica was a vibrant living poem of green and light and I noticed many Costa Ricans' eyes shared similar shades of green with hints of brown.  Their eyes easily matched the green of the lush rain forests that we drove past, the pale green leaves of the papaya plants that sprouted mightily from the roadside farms and the bright green of the moss that caked the rocks of the cascading waterfalls at La Paz Waterfalls Gardens .That was also quite a sight and a wet one too. The pounding force of five waterfalls created swirls of soothing mist throughout the trails and an unforgettable liquid roar. (Speaking of, we had fun hiking in the rain and I'm glad I had my black hoodie handy.) I remember how I extended my arm and felt the power of the cool rushing water and I couldn't get enough of inhaling the fresh pure air. Ahhh! 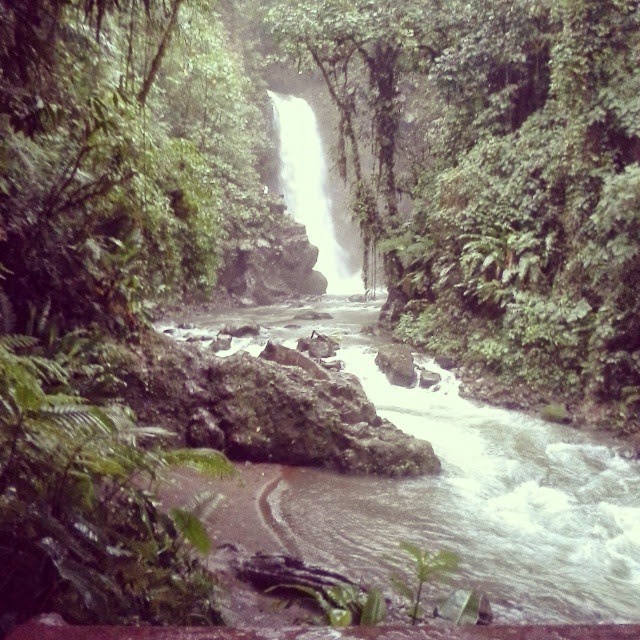 At one point, I leaned back from a pedestrian bridge and saw right through the backside of the falling water, a glass liquid sheet. It was like looking through an underwater lens. Besides the waterfalls, there was an indoor butterfly garden that reminded me of a greenhouse but solely for these majestic winged creatures that fluttered all around, as if welcoming us into their butterfly world. In fact, Costa Rica extended that warm welcome mat throughout my few days there.

One of my favorite stops was the surrounding areas of the Arenal Volcano about three hours north of San Jose. The volcano is so wide, so high, so massive that I found myself staring trance-like at all the plaited trails from former lava flows and the layers of dense rain forest that hugged them.

Although the peak was mostly shrouded by a never-ending conga-line of puffy grey clouds, the volcano was unmissable. Wherever I turned, it was there, looming in the background like a giant cone-shaped moon, an ethereal presence. The Arenal area hotels have funneled some of the volcano's hot water into small lagoon-like springs. Toe by toe, I carefully waded into the muy-caliente water that hinted of sulfur.  But once I adapted to the hot temps, I leaned my head back against the rocky edge and allowed the rising steam work its wonders. (On a side note, Leaf said that these waters have a healing element because they are rich in minerals and I felt more relaxed and Zen-like after sitting in these springs. Maybe a little bit too relaxed because I had to use the bathroom as soon as we got out. Sorry, TMI)


Being a long-time hiker thanks to my time in Boston's Blue Hills, we ventured to the Mistico Arenal Hanging Bridges park, a 1.8 mile trail connected by six suspended bridges over the rain forest.  As we constantly ascended and descended the brick-like path which left some park-goers breathless (and sitting on benches along the way), the bridges provided stunning views of the Arenal volcano as well as the blankets of rain forest canopy below. If you looked closely, you could see other hikers moving like ants.

The bridges swung, wobbled side to side especially if you had several people on it at the same time taking their sweet time taking selfies with their selfe sticks. So I had to hold onto the thick wires at each side and brace myself. Whoa!

With the higher bridges, I tended to skip (okay, prance) toward the end because I - gulp! -  got nervous at the highish heights.)  A chorus of birds and some rustling in the bushes created an unofficial soundtrack to the forest but I didn't see any animals or wildlife except for a big spider climbing a tree and a small army of leafcutter ants. Where were the monkeys?

Correction, I did encounter some wildlife - friendly brown raccoons that approached our car in Arenal. Another one looking for a hand out approached Leaf (as I dashed to the car because I wasn't sure what it was exactly). And I saw others at a gas station pleading for someone to feed them and climbing garbage bins. We debated whether they were anteaters or raccoons or a mix of both because they were small, brown and friendly with long snouts and sharp claws. For the record, I think they were raccoons.

And I was surprised to see so many dogs from fox terriers to chihuahuas and mutts that looked like German shepherds and Labradors. They leisurely roamed the streets, hung out on country roads or sat in front of a home or business without a care in the world. No leashes either. It's as if their owners told them, "Go and have fun today and see you home later!"  That relaxed, take-your-time and enjoy-yourself attitude seemed to capture the vibe of the country.

A quick note about the food. I noticed that diners enjoyed eating a traditional dish called casado or "married man."  It's a dish with side portions of rice, beans, a meat (beef, chicken, fish), salad and plantains - all beautifully placed in their own little corner of the plate, almost like a sampler.

And the McDonald's in one of the country towns outside La Fortuna had a pineapple pie (or pina pie!) I also savored agua dulce bautizada (a hot concoction of sugar cane juice, rum, cinnamon and lemon which gave me a little pick-me-up.) For breakfast, I had some sweet pink guava juice which I was surprised to learn that the fruit is light green on the outside and bright pink within. This also grows on Costa Rican plantations. (Maybe my glass of freshmade guava juice was too sweet or had a little too much caffeine or something because I had to go the bathroom after drinking it all. Sorry, TMI #2)

But what I really enjoyed most from Costa Rica was the pride that Costa Ricans or Ticos as they like to call themselves have. They wear that Tico pride like badges of honor. Even though I'm not a Tico (my Americanized Spanish with a Cuban inflection and my where-am-I-now-looks tended to give me away at every tourist stop), everyone was so friendly from fellow passers-by and tourists to working folks we encountered in our travels. I guess you can say the raccoons/anteaters and dogs were friendly too.

People cheerily began and ended their conversations with the country's catchphrase, "Pura Vida" which means "good life" or "pure life." And I instantly felt that way too during my short time there. Pura Vida, Costa Rica! Hasta la proxima and hopefully with Leaf.