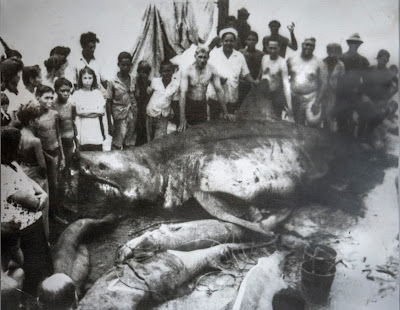 For all you land sharks out there in front of the TV, Discovery channel's Shark Week heads to Cuba to explore the story of El Monstruo. That's the 21-foot Great White shark that was captured off the Cuban fishing village of Cojimar in 1945. I wrote an article about the episode and how it marks the first time that the network travels to Cuba for its Shark Week.  A team of Florida shark scientists work with their Cuban counterparts for the expedition that also looks at why the island nation draws big sharks. At an estimated 7,000 pounds, maybe El Monstruo was the Cuban Jaws?

Photo above is of El Monstruo featured in the episode.