A new reader sent me an email yesterday and it triggered some fond memories for me.

"Just wanted to share that I came across your eBook (Beantown Cubans) as I was eating a media noche and batido de guayaba. lol hahahhaa. Thought it was weird. What a coincidence that you mentioned the same thing, a media noche and batido de mamey, I'm Cuban and Mexican from Boston but now I live in TAMPA. with all the other cubans. just wanted to share, peace. - Angel"

He was referring to El Oriental de Cuba restaurant, the real-life setting in my third book Beantown Cubans where the two main characters Tommy and Carlos meet up each Friday to talk about work, their families and of course, guys! And immediately, a wave of my own memories of eating at this Boston eatery rushed over me.

In Boston, El Oriental is a Cuban institution where Cubans and non-Cubans can find a scrumptious media noche, a creamy pink mamey shake and potent cups of cafecito. But it's also a gathering place in Boston's Latin Quarter also known as Jamaica Plain (JP for locals.)


Besides food, visitors can grab copies of local Spanish-language newspapers such as El Mundo and El Planeta. Flyers for upcoming Latin concerts and festivals fill the window sills by the take out counter. Spanish peppers the air and mixes with the sounds of sizzling steaks from the stove. Framed photos of classic American Chevys and Fords and everyday scenes of Cuban life bedeck the walls. The place is an unofficial community center where New England media can gauge the pulse of the Latino community.


When I moved to Boston, the restaurant reminded me of Miami. It was a piece of Cuban culture injected into this little corner of Centre Street in the Hub. It felt like Miami, like home.  And whenever I could, I would bring a new Cuban friend, non-Cuban friend and some dates (but not at the same time) to introduce them to this little local favorite. A lunch or dinner there served as a form of initiation into Boston Cuban culture. It was a great spot to interview local Latino leaders for story ideas.

I also brought my family here. I remember when my parents visited me for the first (and only) time in Boston, they realized I didn't have any Cuban coffee in my Dorchester kitchen. So off we went to El Oriental for cafecito and brunch. (It was only three miles away.) I think my parents also felt at home there too.  And so when it came to write Beantown Cubans, I knew exactly where I would have the two main characters meet up each week to gab. El Oriental.

When it came time for Open Road Integrated Media to record a video for the book a few summers ago, El Oriental's owner Nobel Garcia was gracious enough to serve the small crew the best of what his restaurant had to offer (Cuban sandwiches, bistec de pollo, chicken sandwich, sweet plantains, black beans and rice -- basically a sampler of the menu). He also plopped a blue Oriental de Cuba baseball cap on me during the shoot as I sipped on the mamey shakes. (I was so full you could have rolled me outside to the Hi-Lo market, now Whole Foods.) 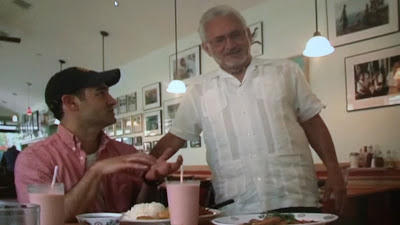 The photo above is a screen grab from the shoot. (That's me with owner Nobel Garcia.) The video is here.    You'll see the tall glass of mamey shake in front of me. Thank you Nobel and the staff of El Oriental for all the good meals and times in Boston. 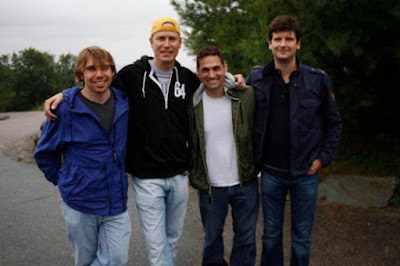 (This was the crew from Open Road Media with me in middle after we pigged out at El Oriental. We then went to the Blue Hills to work it off.  From left, Danny Monico, Jeffrey Sharp, moi and Luke Parker.)