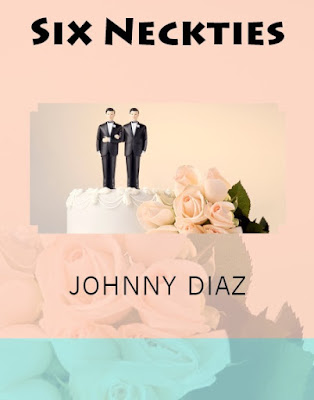 Here's a little preview to my sixth novel Six Neckties which takes place in Ogunquit, Maine (with some Boston.)  The book should feel like one of those fun, light and sweet Saturday night Hallmark Channel movies (my favorite) but with gay men.

Now that gays are getting hitched, it seems that everyone is saying I Do. Except for Tommy Perez.

He's always the best man or groomsman for his friends' nuptials. And with each occasion, Tommy goes home alone with another necktie. He's already on number four. But things seem to improve for the Maine magazine writer when he suddenly meets Danny, a confident freelance photographer who shoots a friend's wedding in Provincetown. Danny is cute enough that he should be in front of the camera rather than behind it.

And complicating matters is the arrival of a sexy and slightly older guest house manager named Ignacio who begins to court Tommy's heart in their small town of Ogunquit.

But is Tommy ready for love again? As he helps his best friends Rico and Carlos prepare for their weddings, Tommy must reexamine his past relationship with his ex Mikey who had issues with the bottle in Boston.

And with two potential love interests on the horizon, will it finally be Tommy's turn to walk down the aisle in his own necktie?

To read the first chapter, visit this preview link.  The book should be released later this month.