That time I was confused for serial killer Andrew Cunanan 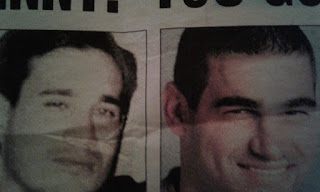 "I am not a serial killer,'' I repeatedly told a seemingly trigger-happy crush of cops as they surrounded me outside a Fort Lauderdale office building.

It was July 1997 and South Florida's eyes were on the lookout for Andrew Cunanan, Gianni Versace's killer.

I had gone to interview a gentleman who may have known Cunanan. But the gentleman mistook my trademark crew cut and thick eyebrows for the real killer's.

He called the cops on me.

And before I knew it, I was standing in front of a small army of men in blue.  I remember inhaling deeply, swallowing my heart (gulp!) back down my throat and slowly flashing a bouquet of IDs.

My press pass, my driver's license, my FIU student ID, even my half-filled Subways sandwich club card - anything that would prove that I was Miami Herald cub reporter Johnny Diaz and not a killer masquerading as one.

It was a simple (and overblown) case of mistaken identity. A doppelganger, a double.

I've been continued for other things, too:  Greek, Italian, even for a girl when I was younger (pre-puberty but that's another story for another blog entry or maybe not.)

But a serial killer has topped them all.

At the time of Versace's murder, fear hung over South Florida like a dark cloud. We were under a police and media microscope. Mass hysteria, a Miami manhunt.

Everyone was looking for Cunanan. So was I as a reporter or anyone who may have known him.

It was after office hours that day in July. The Fort Lauderdale office building at 1975 Sunrise Blvd. was closed.

A door in the back was open so I naturally let myself in. (No one was looking.)

Within minutes, I found myself on the seventh floor asking a frightened-looking older gentleman named Cliff Pettit, "Is this Gamma Mu?" (That was the name of the gay men's organization that Cunanan had allegedly tried to infiltrate.)

"They moved!" Pettit abruptly fired back as he showed me the door.

"Um, thank you and sorry to have bothered you,'' I said to him as I left.

Then it hit me: Where did they move to?

Like I soldier, I turned around. I knocked on the door. But there was no answer.

I knocked harder - the knocks drifted in an echo.

"I know you're in there, let me in," as I continued knocking.

With my head facing down, I rode the elevator back down to the lobby.

As I made my way out of the office building, I found myself greeted by the police.

Once the officers realized I wasn't their man, they broke out in laughs. (At least someone thought this was funny.)

"Johnny, you really shouldn't work on this story. You look too much like the perpetrator,'' said one officer, who was still laughing in the elevator.

"Hey, this isn't funny," I told them. More laughs.

They escorted me back to the seventh floor to reintroduce me to the gentleman whom I almost gave a stroke from the big scare.

Apparently, he had met the real Cunanan earlier that year at a party in San Diego where Cunanan sported a white button-down shirt, blue jeans and a crew cut which was the way I happened to be dressed that day.

A few days later, Pettit called me at work and apologized.

He wanted to make it up to me for calling the police and landing me in the news.

Three patrol cars swooped down on reporter Johnny Diaz of The Miami Herald, who admitted he looks a lot like Cunanan.
``I was trying to interview someone but when I walked in his office, he kind of freaked out,'' Diaz said. ``I walked out but in the meantime, the person had called the police. I'm about the same height and weight as Cunanan and I got the crew cut and the big eyebrows.''

And there was the interview on NBC's Dateline about mistaken identities.

But back to the phone call from the gentleman who thought I was Cunanan. He wanted to invite me to an upcoming Halloween bash in Fort Lauderdale's Coral Ridge neighborhood.

Just as long as I didn't dress up as Cunanan.

PS
And the story continues. Steve Rothaus of The Miami Herald added this graph to his new article on the rise of the LGTBQ community in Miami Beach during the Versace years for the 20th anniversary of his death.

Until Cunanan’s death, hundreds of tipsters throughout Florida reported to police they might have seen him on the loose. FBI agents even questioned Miami Herald reporter Johnny Diaz, then 24, after a man he tried to interview decided the young journalist looked just like Cunanan, 27.

My former coworkers at The Miami Herald created this side-by-side comparison image below as a gag for my goodbye page when I left the Herald to go the Boston Globe a few years ago. 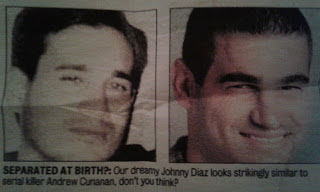