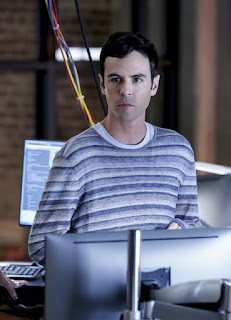 Miami native Blake Lee plays a computer programmer on the new CBS crime drama "Wisdom of the Crowd." On the show, he helps Jeremy Piven's character, who developed a crowd sourcing app called Sophe, solve crimes in San Francisco. The show is kind of like everyone using Facebook and their smartphone to find suspects or missing people.

Folks might remember Blake from the 2015 James Franco movie "I Am Michael'' where Blake played Boston journalist and author Benoit Denizet-Lewis who wrote the New York Times Magazine article that was the basis for the film. (I wrote a story about Benoit and his Good Men Project online magazine for men when I was a Business reporter at The Boston Globe a few years ago.)

This week, I wrote a short profile about Blake, how he discovered his acting chops at Miami Palmetto Senior High and how he enjoys spending time with his husband Ben Lewis and their adorable Jack Russell terrier named Todd when he's not shooting the CBS show in Los Angeles.

(Photo of Blake Lee from CBS)