This is the last year that Volkswagen produces its iconic octogenarian Beetle. The last model recently rolled off the assembly line in Puebla, Mexico. I thought I'd list some of the things that I enjoy about my old-new Volkswagen Beetle since the car comes up in conversation often.

LEGACY
The Beetle has a long history. The idea for the original Beetle goes back to the early 1930s when lead engineer Ferdinand Porsche (who later launched the luxury Porsche brand) designed the car under Adolf Hitler's regime during World War II.  The first one was produced in 1938. Hitler wanted the an affordable simple car or the people car's (Volkswagen in German) for civilians for the country's then new network of roadways. It was an air-cooled, rear-engine vehicle that could seat five people. (This orange Beetle convertible I photographed below is not my Beetle but one I've seen around Miami often. It looks like the early model.) 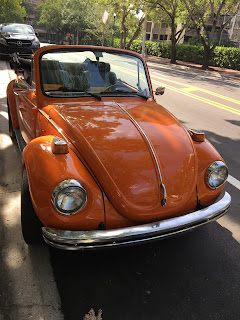 TIMELESS
The car has evolved over the decades, from the original egg-shaped model to the bubbly New Beetle revival in 1998 and the more recent beefier redesign in 2012.  My car is a 2016 Beetle S (basic Beetle.) Whether it's the original or the new new Beetle, the car is a classic and has never gone out of style. (That's my Beetle pictured below.) 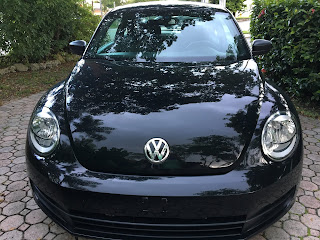 PORSCHE COUSIN
I like to think of the Beetle as the poorman's Porsche. VW is Porsche's parent company. A 2019 basic Beetle starts at $20,000 while a new Porsche 911 Carrera starts at (gulp!) $97,000.  Despite the big price difference, I can see a slight resemblance between the vehicles.  Pictured below is my Beetle on the left parked next to someone's Porsche 911 Carrera at a Miami supermarket. See a design similarity? Am I being too optimistic? Should I check my glasses? 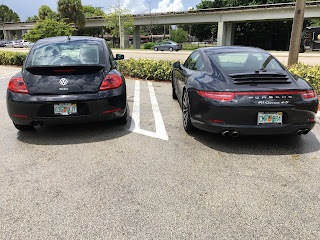 SPACE INVADER
You can park it almost anywhere, even in tight spots as I did in the photo below. Actually, I'm not even sure that's an official parking space in Miami's Coconut Grove but the car fits so I park it there when I go to the gym. 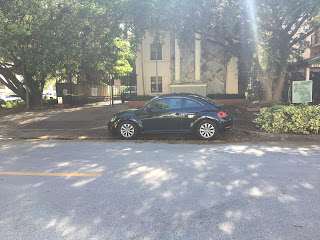 ROOMY
Despite its small appearance, the car is roomy on the inside. The Beetle is just one inch longer and wider than the current VW Golf, another hatchback (yes, I compared the design specs.) The Beetle also comfortably seats four adults (and a Fox terrier.) 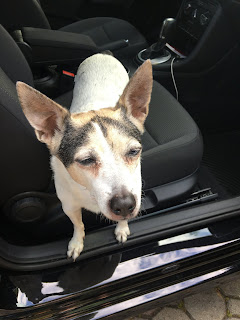 GAS FRIENDLY
My Beetle's 1.8 liter Turbo engine gets 25 miles per gallon in the city and 34 mpg on the highway. The car averages 305 to 315 miles on a full tank of 13.5 gallons. Since I live in Miami and because the car is black which attracts the heat, I often drive with the A/C on. I'm sure I can go farther, maybe 375 miles on a full tank with the windows open but then I'd be sweating bullets.

NOT MY FIRST
I'm no Beetle virgin. A couple of years ago, I owned a 2010 Red Rock edition of the New Beetle. It was a metallic pumpkin-pie orange with a blacked-out sun roof, tinted windows and a black interior. The dashboard lights glowed in purple and red hues. I loved that little bug and other drivers did too. On Interstate 95 or at red lights on US-1 here in Miami, people would give me a thumbs up or ask me about this special edition. 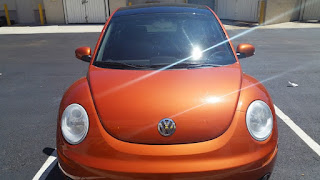 VW only produced 750 cars of this version in the U.S. with the idea that it would become a collector's edition so that's why it's rare to see one on the road. Despite its cuteness and uniqueness, the car had a 2.5 liter engine and was so-so on gas, (20 in the city, 29 on the highway) but it had zip and pep.

But I had to sell the car for cash to help pay for some of my late father's medical needs.  I never forgot the car and that's why I always wanted another vehicle which I got this year. Still, I honor my first Beetle with an orange VW T-shirt I bought (pictured below) 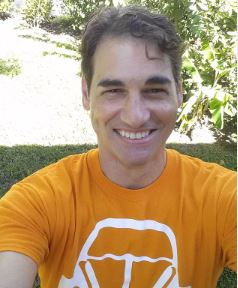