Being Cuban: Having a media noche packed in your lunch bag

There's a nice story in today's NYTIMES about being Cuban and American and the cultural tug-of-war that comes with identifying with that hyphenated-label.

The story talks about how some Cuban-born Miami residents would like to return to the island nation one day but that after 45 years, their lives are pretty much rooted in Miami. They've moved on in one way or another. The story talks about how some of their Miami-born children have full lives in Miami and would have a hard time re-establishing themselves in a country they've only experienced through stories told by Cuban-born relatives via generations and the Florida straits.

This has been a big topic lately but nothing new to anyone who is Cuban or American or Cuban/American. I was recently interviewed by the Univision-Boston affiliate on this issue because of the changes going on in Cuba this week.

In Boston, I identify myself as Cuban-American because that's exactly what I am, born in Miami to Cuban parents. My name says it all: Johnny Diaz. (You can't get more American than Johnny or more Cuban than Diaz.) And I feel equally both. My DNA is Cuban but my sensibilities and upbringing is very much American. It's that duality that co-exists in many of us and defines who we are, giving us two worlds to draw from. (I was probably the only kid in my Miami Beach elementary school classes whose Cuban mother packed him a media noche sandwich for lunch every morning.) Like I said, we have one foot in one culture or the other at any given time. And I for one, feel very culturally blessed for it.

Anyway, enough about me, read the story.

THE VERDICT IS IN: JUDGE MARIA LOPEZ RULES THIS PARTY 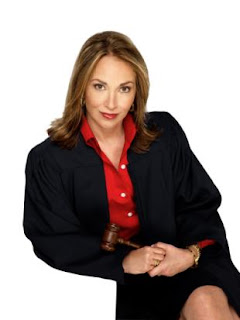 "Eres Cubano!" Judge Maria Lopez greeted me when I arrived at her majestic Newton home for a private party for Boston Latinas the other night.

"Si, soy Cubano-Americano,'' I gushed at the door, giving her a hug and a kiss on the cheek. I was feeling a little funny for attending a party solely for Latinas and I knew I was going to be one of the few guys there but then I realized I was one of two. (Lopez's husband was the other dude at the party of two dozen women.) But awkwardness disappeared right away.

"Where were you born?" she asked by the lip of the door as other professional Latinas mingled in her home which looked like a mini Museum of Fine Arts with her collection of paintings filling every inch of her walls.

"Miami!" I said, lighting up at the thought of the warm tropical weather back home. "But I live here now, like you.''

So I met another Beantown Cuban or Cubana as you might say.
Maria Lopez has her own syndicated court TV show where she dispenses her rulings with a mix of sass and Spanish. Maria was born in Cuba and moved to Boston at an early age. She's become a household name, not just in Massachusetts but around the country for her outspokenness and tell-it-like-is manner in court. It's why she landed on the Boston bench and how she got her job on TV, which has been extended for a second season.

She welcomed guests into her home with some of the pluck that people get to see everyday on her court show.

On this night, she invited her guests to celebrate the launch of EntreAmigos, the new publication that features snapshots of Hispanics attending Boston social events. (I wrote a Globe story on this recently.) The magazine, which is a publication of El Planeta newspaper, made its debut in December, with Maria on the cover. She's also on the pub's editorial committee. "We are arriving, Boston's Latino social scene," Maria said in her nasal Spanish voice to the group of about women as they stood in her living room, admiring the artwork and high ceilings. The party was also a way for Hispanic women -- writers, journalists, artists, and community activists -- to meet one another and gab in English and Spanish and I got to practice my quickly-fading Spanish with them. It's a rare scene in Boston, having such professional Latinas such as playwright and Wellesley professor Melinda Lopez (who wrote Sonia Flew), Boston Univision anchor Sara Suarez and Maria Lopez all under the same roof interacting with one another and proudly sharing their experiences as Latinas in Boston.
Posted by Johnny Diaz at 3:20 PM