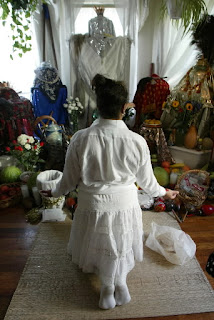 "Mom, she's a Santera!"
"Por favor, don't tell your father about where we're taking you this afternoon or I'll get in trouble,'' my mother urged after we left the house of the spiritual reader. "Tell him that me and your sister took you to Coconut Grove or something.''I knew they were up to something and I knew this would be one of those wacky Diaz family adventures when my mother and sister basically abducted me and took me to a santera. When we pulled up to the townhouse in Miami Lakes, I was greeted by a lovely and energetic blonde woman dressed from head to toe in white. She radiated such good energy and we connected right away. She led me by my hand, sat me at her dining room table, and spread a deck of Tarot cards before me. She began to channel the patron saints and listened to what they had to say about me. Smokey trails from incesence sticks swirled aboved us near the kitchen. My mom and sister sat in the living room pretending not to listen but the spiritual reader picked up on spiritual static, an energy block. They had to go.

"You two need to leave. I can't read Johnny. Your presence is blocking the energy flow. I have a block.'' So my mother and sister, who were slightly annoyed that they weren't going to be able to eavesdrop on my session, took off and went to the mall. Ha!

I don't really tell my mom and sister much about my dating life unless it's serious and since I hadn't talked about "anyone" recently, they wanted to know what I was up to back in Boston besides work and talking about the weather. Hence, this ambush santera visit. No one said the word santera, santeria, Chango, Babalu or Obatala but I knew better. In the Cuban community, you don't talk about these things (sort of like being gay) but since I had done an indepth story for The Globe on the growing influence of Santeria in Boston's Latino community and how a santero priest here was bringing the Afro-Cuban religion which has parallels with Catholicism out of its spiritual closet, I knew what my wacky mother and sister I had gotten myself into.

The spiritual reader, for one, was dressed in white, which is protective positive energy and one of the saint's favorite colors. When I went into the bathroom, I sneeked a peek into her bedroom, which was a shrine of apples, oranges, bananas, and muffins to the patron saints of the religion. But I didn't say anything. I just went with the flow. I felt good about this.

After the reading, the spiritual reader and I had a nice long chat. She picked up on things that made me believe she really knew what she was doing. I also left feeling even more at peace than when I had arrived. I felt like I had connected with a higher power thanks to her. I was recharged and enlightened.

When my mom and sister came back to the townhouse, they pelted me with all sorts of questions.

"What did she say? Was it good? Did you leave a donation at the shrine? How much?"

I smiled widely and laughed and kept it to myself in the backseat of our Nissan. When we pulled up to our house in Miami Beach, my dad opened the front door with a quizzical look on his face.

"Oye, where did the three of you run off to? You've been gone all afternoon!"

The three of us looked at each other with smirks on our faces.

"Oh, we went to Coconut Grove!"

To read more about Santeria and how it's been referenced in our popculture (from I Love Lucy and Gloria Estefan songs to novels) read my Globe story here.