My sister, the fighter 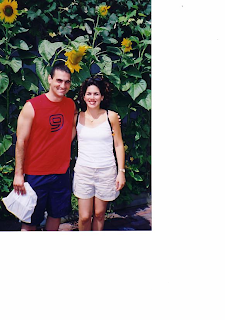 (This story was a finalist for the upcoming Chicken Soup for the Brothers'/Sisters' Soul. I didn't make the final cut (darn it!) but I wanted to share this little tribute to my sister who says I don't talk about her that much. By the way, she's cute and single! She'd be great on The Bachelorette but she doesn't listen to me.)
"But you said you would fix the gas cap!" my sister Cary scolded the dealer. "That's my little brother's new car and you are backing down on your promise,'' she persisted.

My sister wouldn't back down. And wouldn't you know it, the dealer replaced the faulty gas cap and gave me a new one, for my slightly used Toyota Tercel.

I was 18 at the time and it was one of many times when my big sister fought for me. Ever since I was born, she's been there for me, usually pushing me to fight harder for something. If I didn't fight, she would for me.

I always found this (and when she calls me little brother or John) annoying. I would cringe and roll my eyes when she would make a scene in her efforts to get something done for me. I guess because I've always been more mellow and laid back and a go-with-the-flow kind of guy. Cary, on the other hand, wasn't. She'll push, prod, and bulldoze some more until I got the best deal I could.

In high school, when I was overlooked for an Advanced Placement History class, Cary stormed into the department head's office and presented my case. "He's on the honor roll. Just because he didn't score very high on a placement test doesn't mean he can't do the work,'' I remember her later recounting the story to me. And wouldn't you know it, I ended up making the cut for the class, thanks to Cary.

I don't know what I would have done without my sister growing up in Miami Beach. Our parents, Cuban exiles, didn't speak a word of English but Cary did. She was there at every parent-teacher open house throughout all my elementary, middle and high school years. She served as a translator between my parents and my teachers. She helped me navigate the sudden overwhelming load of classes and electives in middle and high school. She explained the importance of the PSAT and the SAT. She filled out my college and financial aid applications. Whenever we had a problem with a bill collector, Cary was the mediator between my parents and the company.

When I began interning in high school at The Miami Herald, she read every article and translated them for our parents so they can read what I had written, something she still does today with my Globe articles. (I don't think she has read the more sexual parts of my book to my parents but that's okay.)

My sister fights for me so passionately because she was a born a fighter. Born six months premature as a twin, she and her sister Miladys were kept in incubators for four months. My parents trekked to and from the hospital every day to watch the tiny twins struggle to breathe with their underdeveloped lungs. Only one survived. Cary. My parents always said she survived because she fought to live and it's been a trait that has defined her life and mine.

When I was born four years later, my sister probably felt like she had to take care of me and fight for me, the way she had hoped she could have for her identical twin. As I got older, Cary was always there, fighting my battles, even when I didn't see any ahead. Nothing was ever good enough for me. My sister always stepped in to find me the best shirts, jeans, sneakers, bicycle, and yes, cars.

When I bought a new car not too long ago in Boston, I kept thinking about what my sister would ask the salesman or the financial manager to get a better deal. When I wasn't sure, I politely excused myself from the salesman, turned around, and dialed Cary on my cell phone. "What do you think of this? Does it sound like a good deal?" I asked Cary who lives 1,600 miles away in Miami. "No. You can get a better deal,'' she said. "You deserve the best!"

I got two good deals - the car I wanted and a great sister.