Out in the Sunshine

Ahh, Miami. The tropical vapor. The sunlight so bright that it casts a yellow incubator glow over the 33139. My home. It's also the setting for this year's National Lesbian and Gay Journalists Association conference and this is my first time attending.

I'm here helping man the NYTIMES/Globe booth and telling people what a great paper I write for and the possible opportunities there for inquiring journalists and ambitious college students - if they can handle the deep winter freeze. I feel like the gay Cuban ambassador for the paper as I sit in the booth and pass out pens and chocolate globes to anyone with a sweet tooth.

I also wanted to come to this event because I wanted to see what NLGJA was all about. Part of me was confused why there was a NLGJA group. I find that most newsrooms have plenty of gay journalists/editors. I'm a member of the Hispanic journalists association because we're underrepresented in most mainstream newsrooms. (Same goes with black, Asian American and Native American journalists.)

So I felt like I needed to explore NLGJA in person. In the past three days, I've met some incredibly talented gay journalists and editors with a common interest: our love of being storytellers and communicators. It has felt like one big reunion, seeing old friends from Miami and other newspapers and TV outlets from across the country. It's also been a chance to meet new faces, engage in a dialogue, be friends, and share in our newsroom and gay experiences. It felt like one big extended family. It's Friendster in person. Unity. Connections.

I sat in a workshop listening to print and broadcast colleagues talk about the convergence of our mediums and the benefit of being able to cross from print to the Web or from radio to TV since they all seem to be overlapping in one way or another.

One of the most interesting panels I sat in focused on gay TV anchors and their experiences with being out off-camera which also touched on the lack of openly gay women broadcast journalists. 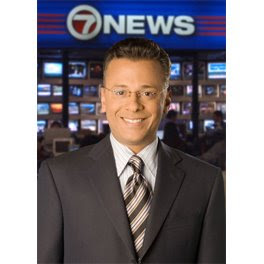 There was Craig Stevens, the co-news anchor for Miami's Channel 7 featured in the photo to the left. He talked about how fortunate he is to work at a station that embraces and encourages him being open in the community even though some of his on-air colleagues aren't as out as he is. 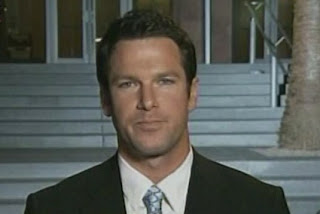 There was CNN's anchor Thomas Roberts telling an audience how he's proud of his partner and how he has gradually come out at work over the years. (Being a panel speaker at a gay journalists conference, he said, was the biggest step he took to really being out in public.)

"When you hold something back, that's all everyone wants to know,'' he told the audience.

There were the CBS reporters from LOGO. My friend Itay Hod -- pictured below -- kept making silly faces at me that would make me crack-up in mid-sentence during interviews. Itay spoke at a diversity meet-and-greet event Friday night for minority journalists. 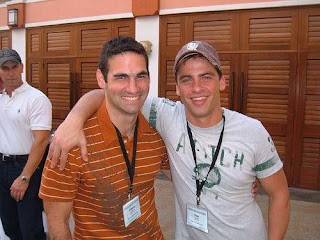 
So all in all, it's been a gay old time. I'm glad I've been a part of NLGJA (say that three times) this year. I can't wait for next year. At least I know I'll have some new friends to hang out with and share stories, like an annual reunion. San Diego, here I come.