This is the first in an occasional series of interviews with each of the main characters from my books to give readers a quick update on their fictional lives. First up, Tommy Perez, of Boston Boys Club and the upcoming, Beantown Cubans. Disclaimer: This is an inside joke for my readers, who have suggested to me at book readings and in emails that Tommy Perez seems to mirror me a bit too much. This is my way of separating the author and the character. We really are two different people. I swear!) 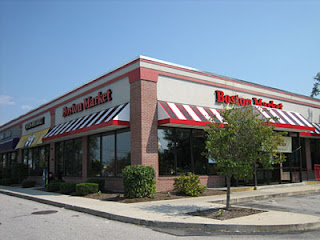 Every afternoon at 12:45 on the dot, he eats lunch at the Boston Market on Gallivan Boulevard in Dorchester. His beat-up old black Jeep Wrangler, with a license plate the reads QBAN, has a regular spot here. Tommy agreed to meet there, for old times sake (even though I am more partial to the Subways shop in Fields Corner.)

"Tommy, so good to see you."
"Same here, chico," he says. We greet each other with a manly Cuban macho hug. I then settle into the table by the window and I notice that Tommy has already ordered. His plate is topped with fresh slices of hot turkey, a side of mushy sweet potatoes, a plump corn bread and a chocolate chip cookie. A large diet Coke towers over the food.

"Thanks for agreeing to meet me here for my website. I really appreciate it," I say.
"Anything for a fellow Cuban writer,'' he says sipping his soda.
"So, since we last saw you, you were single in Boston Boys Club. How has your life changed since then?"
"Bueno, I still write my news articles for the paper and I learned a lot about how alcoholism affects a sober partner. Anyway, right now I'm just enjoying being a reporter and seeing out what's out there in the single life. But it's been hard, chico. If you know of any cute single guys with a good job and excellent credit score and who can sing like Josh Groban, inquiring Cuban minds want to know!" Tommy winks. Throughout the interview, Tommy twirls one of his longer brown curls. I want to grab a pair of scissors from the Supercuts next door and tame his bush of curls.
"Um, okay,'' I say. "I'll keep that in mind. I'll hook you up. How hard has it been for you in the dating scene?" Tommy takes a deep breath before explaining.
"Oh man, it's the same people,'' Tommy says. 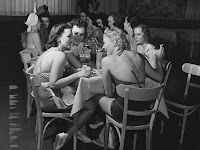 "Whether they go to Club SoGay or play in the gay football/basketball/softball leagues, it's the same guys, just different settings except on the field/court, they wear their tight jerseys and mysteriously maintain their spiked up gelled hair throughout a game. Tu sabes, Johnny?"
"I feel ya, dude. It's hard out there for a gay man in Boston."
"And I keep meeting these strange characters. One guy showed up at my door and I never gave him my address," Tommy says, his eyes widening.
"Que cosa? That's creepy. What did you do?" I say.
"I didn't answer my buzzer. I watched him through the slits of my Venetian blinds and waited for him to leave."
"Tommy, you have to be careful."
"Yeah, tell me about it. Then there was this guy who,'' Tommy leans in and whispers "who wore a mirdle.''
"Que cosa? What's a mirdle?" I ask.

"A girdle for men. I almost freaked out. It was like a space-age body suit. See what I mean, some colorful people out there in single-land. And then there was the guy who wanted me to take a photo of my sock."
"Uh, Tommy, don't you mean something else that rhymes with sock?"
"Like clock?" Tommy says with a tight grin.
"You know what I mean sucio! So he really wanted you to take a photo of your...sock?"
"Yeah and not just any sock, a dress sock on my right foot."

"Um, okay. Maybe you should take a break from guydate.net."
"You're probably right Johnny. That's why I'm glad I have a new friend in town, named Carlos. He's a teacher from Miami who moved to Boston this past year to teach at Dorchester High. He's my hang-out buddy. We call ourselves the Beantown Cubans when we go out for drinks."

"Hmmm Tommy. I wonder where you got that name from." I narrow my eyes at Tommy with a smirk. He sticks out his tongue at me.
"Speaking of Beantown, you've been in Boston a few years now. Do you feel like a native? Do you miss Miami?" I ask.
"You tell me?" Tommy says.
"Oh, flipping the interview on a reporter, huh? That old trick. Deflecting the question. This is about you, not about me. So you go first."
"If you insist Johnny...Yeah, Miami will always be a part of my heart but Boston has grown on me. I love the culture, the diversity, and walking around downtown, which is like being in a museum that never closes. Maybe in a past life, I was related to Paul Revere or something or I worked on the Mayflower." Tommy giggles at his own cheezy joke.

"And your parents? Don't they and your friends want you to move back to Miami?" Tommy takes a deep breath.
"Deep down, I know they do but Boston is my home and they all respect that. I really like it here, Johnny."
"Have your parents visited yet?" Tommy rolls his eyes like two small bowling balls and frowns.
"I wish. My ass is getting sore from sitting in the tiny AA seat on my flights down there. It's time Boston had a Miami Cuban invasion,'' Tommy says.
"Hey, I forgot to mention, we started a local chapter of the National Association of Hispanic Journalists. Bro, you gotta join. We need you to represent."

"Thanks Johnny for filling me in. I think I'll join. I'm already a member of the gay journalists group, NLGJA. Maybe being a member of NAHJ will help keep me out of trouble. That is so cool, we have enough Hispanic journalists in Boston to start a chapter."
"Well, I keep importing them here with my books.'' Tommy and I exchange a wink.
"And what about you JD, what have you been up to? I rarely see you out."
"I'm still writing. In fact, I'm always home writing a new book. I'm the homo hermit. I go hiking and running around Jamaica Pond. I'm teaching a writing class part-time too at a local college."
"Wow, it sounds like you have a lot on your plate. I think it's great that you're teaching, Johnny."
"I love my students and they always ask good questions. It's fun to teach and share what I know about writing and journalism to the next generation of writers. Hey, maybe you can be a guest speaker. I'm sure my students would relate to seeing a youngish local journalist." Tommy blushes and looks down as he grins.
"Anytime. I'll be there."
As Tommy takes a swig from his Diet Coke (he seems to consume a lot of it), I notice a tall lean and preening model-wanna-be with a nest of short but loose blonde curls walk into the restaurant and survey the restaurant like a human lighthouse. He recognizes Tommy right away who looks trapped right about now.
"Are you okay Tommy? You look like you just saw a ghost?" Tommy takes a big gulp.
"Worse, it's Kyle, reality-TV Kyle. You know, Mr. KY?"
"Oh yeah, I've seen him at some events in town. Uh oh, he is probably going to hit us up for some story ideas. Do you want to get out of here?"
"Si, por favor Johnny. If we don't leave now, he'll invite himself to our table and hijack all our food and conversation.''
"Okay Tommy, at the count of three, we'll make a run for it. I'll meet you at El Oriental de Cuba restaurant in Jamaica Plain. You should know where it is." 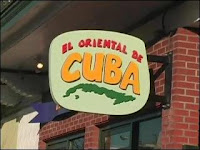 I start the count down. Go go go! Aller aller aller... I sing outloud ala Ricky Martin. Tommy shovels the rest of his sweet potato into his mouth, grabs his drink and scurries out the door.
As I begin to follow, I hear a certain feminine lisp calling out, "Hey guys, wait for me. I want to tell you about my latest project. Hold onnnnn....'' But Tommy and I are already out the door. Tommy hops into his Jeep. I jump into my VW. In a few seconds, we peel out of the parking lot.