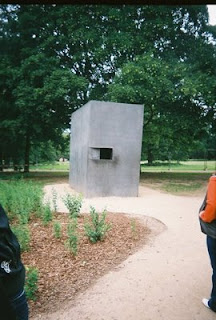 During my recent third trip to Berlin to visit a good friend of mine, we stopped by the city's Gay Memorial.
The monument, a concrete slab, was inaugurated last year to honor the thousands of gays persecuted by the Nazis between 1933-1945.
The memorial is easy to overlook when walking by it.

It sits alone at the edge of the city's urban park. But if you take a closer look, the slab has a window which shows a film of two men kissing. The video loops.When we stopped by, several American tourists were taking photos and peeking into the window to watch the video, which is in black and white. 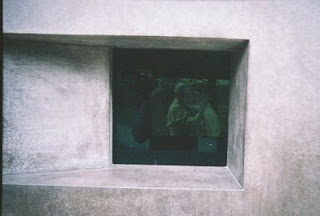 And by the entrance of the park, there's a plaque that explains the importance of the monument. 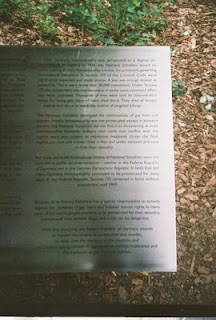 It states that the Nazis believed homosexualty threatened their master race. At least 15,000 gays were killed in concentration camps. This monument, which sits across the street from the larger Holocaust Memorial which takes up at least two blocks, serves as a way to remember them.

(That's me above standing in front of the memorial.
Posted by Johnny Diaz at 11:55 AM