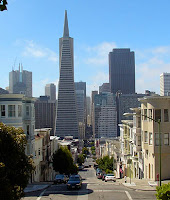 I've been meaning to write this post but I wanted to finish reading a book, which has to do my with my recent trip to San Francisco.
I finally visited this beloved West Coast gay utopia. My main reason for visiting two weeks ago was for a Beantown Cubans reading at a small but well-known gay bookstore, A Different Light, in the Castro district. And I figured - this was the perfect excuse to visit a city so often celebrated in movies and television series. (I kept thinking I was going to bump into the Halliwell sisters from the former WB series, Charmed, which was set here.) 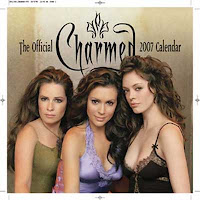 I did the usual tourist stuff. I walked along Market Street, one of the main city drags, down to the Embarcadero, the eastern waterfront that faces the white-tipped choppy waves of the bay. I hiked up and down steep boulevards such as Powell Street, where my calf muscles screamed at me for torturing them with such treks. (Meanwhile, riders leaned out of the trolleys that effortlessly seemed soared up the street. I could have sworn that one of the passengers stuck out their tongue at me for being the poor sucker climbing the inclined street.)

That Sunday, I walked from my hotel in Union Square to the palatial Golden State Park. (A 9-mile walk roundtrip.) I didn't know what got into me but I was on such a high from marveling the city's architecture that I lost track of time - and distance.
Along the way, I was surprised to see so many couples (male pairs or women with women) walking and holding hands without a care in the world as they passed all the street shops flanked with sailing rainbow flags along Market Street near Castro. (I rarely see the hand-holding or the waving flags in Boston or Miami.)

Once at the Golden Gate Park, I strolled inside the Japanese Tea Gardens, a hidden oasis within the park. The trees were so tall and otherwordly that I thought they were digitally added by a filmmaker. The scenic garden and its shallow tranquil ponds provided a much needed shady Zen-like respite. My legs thanked me for stopping. 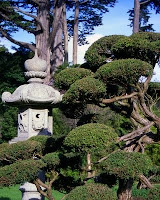 And after barely recovering from all the walking (my legs almost pulled a mutiny on me), I finally got to meet fellow author Michael Nava. If you haven't heard of Michael Nava, he's regarded as the first Latino gay author in the US who broke into the literary scene in the mid-1980s and 90s with a series of mystery novels featuring a Chicano gay lawyer named Henry Rios.
Nava, an attorney himself, wanted to portray gay Hispanics like himself as they balance their professional careers with their love life. His Henry Rios books, about 7 in all, have won awards.

But more importantly, Nava has opened doors for up and coming gay Hispanic writers like myself and others. While gays remain a minority, Hispanic gays are even a smaller group and Hispanic gay authors are even a tinier community.
So I was delighted to finally meet Michael Nava. He wanted to show me other parts of San Francisco, where he lives and works as an attorney. (He's also running to become a judge and is currently blogging about that.) We hopped into his white Honda CRV and he whisked me away from bustling Union Square and Market Street to the out-of-the-way Mission District, a colorful artsy neighborhood home to many Latinos. (Think of San Franciso's version of Jamaica Plain in Boston but with a breeze.) The district serves as the capital of city murals which are splashed on various businesses, alleys and residential buildings, giving the area a south-of-the-border feel. 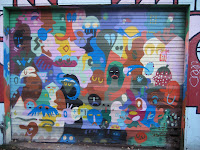 The area is also home to many Mexican and Central American immigrants and walking around the center with Michael was like visiting an outdoor urban museum that never closes. There are so many murals that a neighborhood association offers a mural tour to art lovers. We bumped into them as we roamed the neighborhood on this sunny breezy October day.
It was a slice of San Fran I probably wouldn't have visited simply because I didn't know about it. And over a late lunch of chicken pot pie, California organic apple juice and pumpkin pie at a local eatery called the Mission Pie, Nava and I swapped stories about being gay Hispanic authors. He told me how he began writing his books in his 30s, when was about my age. (He's now 55).
"You're still young, Johnny" he said as hopped back into the car.
"Oh please, look at these grays!" I said, pointing to the salt-colored strands of hair above my ears. I immediately felt a literary kinship with him. I hope to be writing books for the next 20 years as he has. 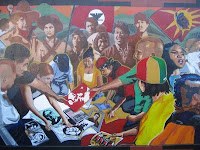 I've only read one book completely "The Death of Friends" andwrote a review of it and now I'm reading the first book, "The Little Death" but based on my conversation with Nava and from what I've read so far, the novels aren't just mysteries but an unfolding character study. We see how the Henry Rios character emerges from his alcoholism and later watches his HIV-positive lover fight AIDS. The reader follows Rios as he excels and fumbles in his law career while wrestling with issues of race and ethnicity as a gay Latino in California. And after our lunch, Nava took me to another neighborhood that he considers another home - the Castro, where both our books are sold in various bookstores.
At one particular store, we walked in and Nava proudly showed me his novels, which continue to be reprinted by Alyson publishing. 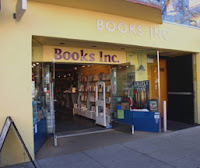 When I asked him which book I should read first, he bent down and picked up "The Death of Friends" from the book shelf that read "Mysteries with a Queer Sensibility." 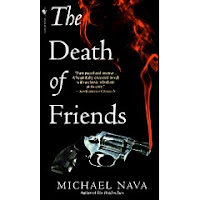 Of course, I bought the book which came with the author's signature. (Nava smiled as I leafed through it at the register.) And as the sun began to dim and the California air cooled, we called it a day and he drove me back to my hotel. (Thank God! My legs needed a much deserved break from my city travels.) We hugged goodbye and I said "Hasta la proxima!" It was one of the highlights of my trip.

To read more about Michael Nava and the novel has been laboring over for the past 10 years, click here.
Posted by Johnny Diaz at 9:38 PM