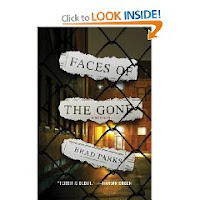 I couldn't wait to curl up with this novel when I saw the author's name - Brad Parks. I knew right away that this would be a fun read. Most readers don't often get to meet a favorite writer or author. I happened to live with Brad briefly and his book served as a good flashback of sorts.
Many moons ago before blogs, Facebook, and Lady Gaga, Brad and I were roommates in Somerville (next to Cambridge for you out-of-state readers) when we worked as college interns at The Boston Globe. (I was the Living/Arts intern and Brad was the sports intern.) We immediately bonded as friends despite our cultural differences (him: suburban preppy white dude from Connecticut who liked to sing acapella outloud unexpectedly. Me: a gay Miami Cuban aspiring features writer who was always giggling at his own jokes and calling his parents each night to inform them that I was indeed still alive in Boston.) I also clicked with Brad's sweet and caring girlfriend, now his wife, who was my partner in crime whenever we hid our favorite foods from our other two roommates. In all, there were five roommates in that three-bedroom third floor apartment in Porter Square. It still ranks as one of the best summers of my life and inspired me to return to Boston later on.
Over the years, Brad and I followed different professional paths. He went on to become a sports reporter at The Washington Post and then worked as a news reporter at The Star Ledger in New Jersey. I returned to Miami and worked as a general assignment reporter at The Miami Herald before returning to Boston to write for my current paper. And somewhere along the way this year, our paths crossed again but this time in the world of book publishing - we're authors, who write books that happen to follow a reporter and his adventures on and off the job with friends and coworkers.

A fan of Brad's colorful sports writing, I knew I was in for a literary treat when I received my own copy of his book and I know you will too.

Below is an excerpt of a review I posted on amazon. I wasn't surprised to learn that the main character's sidekick was a gay Cuban reporting intern named, ahem, Tommy Hernandez. The fictional and spirited camaraderie between Carter Ross and Tommy Hernandez reminded me of that Boston summer of being interns, roommates and friends with Brad. (Tommy Hernandez is also one of the rare gay Cuban characters in a novel.)
Carter Ross has a knack for getting into trouble. As an investigative reporter for the Newark Eagle Examiner, covering crime is part of the job and sometimes, trouble ensues. But when his latest story involves four people found shot in the back of the head in a vacant lot, Carter knows that there's more to the case than the story police are spinning.
And what begins as another Jersey-homicide case unfolds into a who-dun-it thriller that takes Carter and readers on a fun-filled journalistic jaunt through Newark's more urban city streets.
While solving the murders and unmasking the mysterious druglord named the "Director" is the thrust of the book's plot, readers will truly enjoy Carter's interactions with his co-workers.
Carter gets support help from a colorful cast of characters who help the self-described thirty-something WASPy reporter (think Colin Hanks)as his house, life and cat are threatened with each story he writes about the case.
There's Tommy Hernandez, the ambitious and popculture name-dropping gay Cuban news reporting intern who helps Carter with the street interviews

To read the rest of the review, click here.
Posted by Johnny Diaz at 6:42 PM