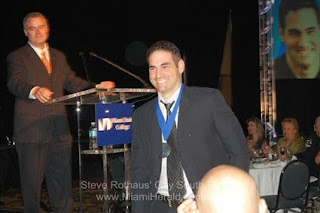 I wanted to thank Miami Dade College for including me as one of their outstanding alumni for the school's annual awards ceremony last night. I received an alumni award in the Literary Arts category for my three novels. I was truly honored (and surprised) by the award, presented by MDC president Eduardo Padron at the Hilton in downtown Miami. And I was in good company, along with CEOs of local hospitals, partners in law firms, a Miami Fire Department chief, a Miami CBS4 TV reporter and a local Spanish TV star and singer (JenCarlos Canela) who was seated at my table.
I only have good memories of my two years at Miami Dade. I remember shuttling back and forth from my classes at the downtown Wolfson campus and The Miami Herald, where I was a part-time intern in the Miami Beach office where I wrote general assignment news features. Between classes, I enjoyed hanging out on the cement steps between campus buildings where I would catch up on my reading, write in my journal and watch the stream of students flow by.
At Miami Dade, I also took some writing classes where I penned short stories - one of which was called Buddy's Buddy, about a little deaf boy lost in the woods where he gets help from a talking squirrel. I still have that story and I remember how much my professor Michael Hettich liked it that he read it outloud to the class. He really believed I was a good writer and that made the world of difference to a young insecure writer at the time.
I also remember another professor, the late Jose Quevedo who really pushed me in my beginning journalism class. He was always hard on me because he knew I could do better. He saw potential in me as a budding journalist and he had an impact on me with his hard discipline and feedback on my assignments. When he died a year later, the school lost more than just a professor - it lost a leader in the community.
All these memories rushed back last night as I interacted with other MDC graduates. I am proud to have been a graduate from there. Again, thank you Miami Dade. (And to The Miami Herald's Steve Rothaus for taking this photos and posting them on his blog, Gay in South Florida.) 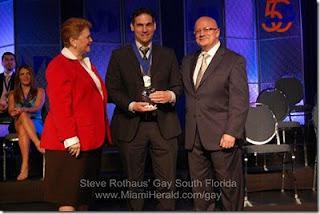