Southern Hospitality in the ATL 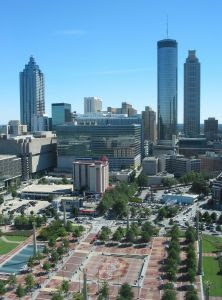 I'm almost a month overdue with this thank you note to Atlanta for the great welcome and experience I had for my first book reading for my new novel, Take the Lead.
It was also my first time to Atlanta and I'm glad I made the trip. The journey began as I tried to find my way out of the Hartsfield-Jackson Atlanta International Airport which is akin to a mini-city with a subway line which had seemingly endless terminals and stops (A, B, C, D, E, T.)Once I finally emerged from the airport, I hopped on the efficient MARTA train, the above-ground commuter rail as it coasted toward the small shiny forest of downtown skyscrapers. My stop was the Peachtree Center in the heart of downtown Atlanta. As I walked the long and wide city streets in the soupy August heat, I asked people for directions to my hotel and folks gladly pointed the way with smiles that matched the warm weather. When I arrived at my hotel, the Hampton Inn, that friendly warmth continued. The front desk clerked asked me if I was Johnny Diaz. When I nodded and grinned, she cheered, "WELCOME! YOU'RE OUR GUEST OF THE DAY!" and pointed to a framed picture of a star with my name on it. 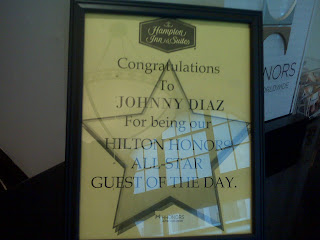 Then other hotel staff appeared and clapped and welcomed me. I was puzzled (this has never happened to me at the other Hampton Inn hotels or any hotel for that matter)and I must have looked surprised because one of the sweet housekeeping staffers then said "We're scaring him. He's not used to this." Being the guest of the day meant I got a free bag of candy, a can of cream soda, an upgrade to a suite and a $5 coupon to their pantry store. (I'm a cheap date. It doesn't take much to make my day.) After that, every time I bumped into a hotel employee in the elevator or lobby, they greeted me with, "IT'S OUR GUEST OF THE DAY!"(I could have spent my whole time in Atlanta at the hotel just for the attention and the free candy. With some downtime before my book reading at Outwrite Books, one of the few remaining gay-themed bookstores in the country, I roamed around downtown. I bounded toward the CNN Center(you can't miss the giant red-hued fonts announcing its presence on the side of its cable headquarters or their silver-haired anchor's mug on grand billboards). Across the street, I caught my breath and studied the map posted at the entrance of the Centennial Olympic Park, a plaza/park in the heart of the city. A friendly police officer then strolled up, greeted and offered to help me finding what I was looking for -- which I didn't know because I didn't have a set agenda for my Atlanta wanderlust. (I guess I must have had a tattoo on my forehead that screamed TOURIST!) 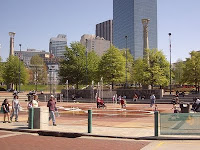 The genteel officer suggested I walk through grand rectangular park and stop by the Georgia Aquarium. He mapped out the way for me. Then with the tip of his hat, he wished me a nice day with his southern accent and continued his patrols.
As I strolled through the park, little kids romped around spewing fountains, splashing each other as their parents looked on. Office workers munched on their sandwiches at nearby benches. Couples lounged on the grassy slopes as they teased each other strands of grass. And then, the majestic aquarium came into view. At first, it looked like the hull of a cruise ship or a futuristic building in one of those sci-fi shows such as Battlestar Galactica. 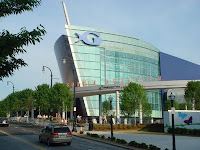 Once inside, the cool-aired aquarium became my best friend for an hour - a nice respite from the heat. One of my favorite spots here was the Ocean Voyager, a tank filled with 6.5 million gallons of water, a mini-ocean. Imagine an underwater tunnel that gives you a scuba-diver's eye-view of all kinds of sea life. There were giant whale sharks, each the size of a Toyota Corolla. There were flapping manta rays that floated by as if taking aquatic flight. Deeper inside the tunnel, visitors looked up and saw the underbellies of groupers, snappers, zebra sharks and just about every fish or sea creature imaginable. (It briefly reminded me of that scene in the 1983 movie Jaws III when tourists were trapped underwater as a great white preyed on them.) None of that shark drama happened here on this afternoon but being inside the aquarium's tunnel was like taking a walk along the sea floor without getting wet. Hundreds of fish beckoned. The only thing I couldn't find here was Nemo.

In another nearby exhibit, graceful white beluga whales playfully dove in and out of their tank and hammed it up for us visitors. Another area was home to a lonely and albino alligator that lazily lounged on its rocky perch. The oohs and ahhs of children and their parents caught my ear and led me to an open-air tank filled with a school of small stingrays and sharks. Visitors were mesmerized as they leaned over and touched the stingrays' velvety skin as they darted by. Some of the stingrays acted like dogs, perching their noses up for people to pet them.
After exiting the aquarium and cooling off with a tall Diet Coke in front of the World of Coca Cola museum which blared Katy Perry and Lady Gaga on giant outdoor speakers, I ventured back to my hotel (where again I was cheered upon). Next stop: OutWrite Books.
The bookstore is a local landmark and has served as the glue for the gay and lesbian community in Atlanta for two decades. 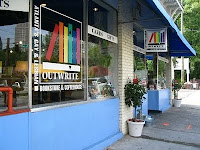 The store sits in the city's Midtown neighborhood along with a pack of gay bars (Blake's is like Atlanta's version of Boston's Club Cafe), boutiques, eateries and shops. I immediately noticed how people enjoyed the simple pleasure of coming to the bookstore to read, savor an iced coffee and chit-chat with neighbors. It's an unofficial gay community center.
I wanted to visit Atlanta because I've heard so many good things about the city and because I have a loyal readership there, dating back to my first novel Boston Boys Club. Since this was my first reading in two years since Beantown Cubans was released, I was a little nervous but those jitters were quickly soothed by the congenial nature of the crowd and bookstore employees.
I had a nice turn out of a folks, one of my most diverse crowds - men and women of various backgrounds and ages. Thanks to my Cuban gay amigo Jake (pictured below) I also got a quick tour of the Inman Park historic neighborhood just the outskirts of downtown Atlanta and home to the first planned post-Civil War suburb in the area. 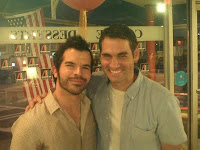 The neighborhood reminded me of Miami's Wynwood neighborhood with its artsy urban renewal vibe. Inman Park is a mix of industrial and residential properties, independent diners/eateries and blossoming art galleries, and redeveloped warehouses and condo lofts. I ate a chicken sandwich and fries at Ria's Bluebird, a diner that had the air of an old southern barroom staffed by waiters decorated in colorful tattoos. The diner sat across from the historic Oakland Cemetery, where thousands of unidentified Confederate soldiers are buried. I had a great sundrenched/sunburned 30 hours in the city and I just wanted to say muchas gracias to Atlantas for the warm hospitality. I will return.
Posted by Johnny Diaz at 11:21 AM