Reading  Most Talkative is like sitting with your legs crossed on a bed with Andy Cohen as he gabs away about his on and off camera adventures from St. Louis to New York.

The memoir is a fast fun read, written in Cohen’s trademark chatty let-me-tell-you tone. Cohen amuses and enlightens as he brings readers on his TV journey from the serious world of network news (CBS) to the drama-driven shenanigans of cable TV (Bravo).  But the book is also a touching read that reveals Cohen’s vulnerable side particularly when he discusses his struggles with being a young gay man coming out in the late 1980s to the backdrop of the AIDS crisis and the homophobia that came with it.

The memoir could be split into three sections. The opening chapter details his first major interview with a celebrity  - Susan Lucci  from ABC’s All My Children- while he was a student at Boston University. The scene sets the tone for the book as well as his career in reality TV.
Cohen then swiftly delves into  his childhood in St. Louis where was a curly-haired Jewish boy who dreamed of being on TV one day. He pokes fun of his "Jewfro'' (I related having a Cuban-fro in Miami Beach) and how he could never shut at home, in school, in the car, and at parties in Missouri.
"I loved growing up there. Little dramas due to my talkativeness aside, I was in a cocoon of happiness and simplicity, untouched by any real societal or domestic problem,’’ he writes.  He cultivated a love for television from watching Charlie’s Angels (he wanted to channel Farrah Fawcett) and seeing his favorite actors on “Battle of the Network Stars.”  Through “CHiPS,”  Cohen discovered Erik Estrada’s hunky character, Ponch.
“He was like Donny Osmond on Mexican steroids with exploding genitalia.”


The story then moves to Boston where Cohen began studying journalism but Beantown was also a place where he became more comfortable in his gay skin. He quickly describes an affair he had with a French guy he met during his summer abroad from school.  “We held hands under the dinner table. The whole thing felt like a fantasy. In my heart, there was no turning back.” And while at BU, Cohen said he felt empowered by some of his openly gay classmates. He eventually came out to his best friends by sharing with them a journal entry he had written about his struggles being in the closet.
“...it was damn hard being hetero and a hidden homo at once. When I got really down, I would just tell myself that I was strong because I had gotten this far and I was OK and well liked.”

At the time, the AIDS crisis loomed largely in the background and generated paranoia for him and other young gay men.
“I questioned every scab, cough, bruise, cut, and cold sore as though it were beginning of the end for me…“Being gay seemed to go hand in hand with AIDS, like an inevitable one two punch.”

The second part of the book focuses on Cohen’s days at the CBS morning news show. He started as a college intern, then a news clerk and eventually moved up the ranks from producer to senior producer and editing stories for 48 Hours.
“While I loved covering entertainment stories and spectacular events such as the Olympics, I’m most proud of my work in breaking news situations,’’ he writes.

For people who have only known Cohen as senor Bravo, they may be surprised to learn of his hard news background. He orchestrated coverage of some of the biggest news events of the 1990s from the William Kennnedy  Smith trial and Hurricane Andrew to the Oklahoma City bombing and fires in California. One moving story involved Cohen accompanying Dan Rather to interview Don Imus for a story about his photography.

Cohen also fondly writes about his mentors who steered him on the right path and called him out when he'd put his foot in his mouth. He also dishes about some behind-the-scenes drama including the time he tricked Oprah Winfrey’s publicist and CBS staffers into airing an unapproved second interview with Mrs. O.

The book picks up speed in the third section which is dedicated to Bravo television and celebrates the success of The Real Housewives franchise.  For Bravo fans, THIS IS YOUR SECTION! Cohen dishes in an almost breathless tone how the series began with the Orange County season which was initially called Behind the Gates and how that was by followed by the New York version, originally called  Manhattan Moms.

Cohen’s news background at CBS helped prepared him well for the storytelling techniques at Bravo.
“For instance, lingering on little moments – a facial expression, a tic, a swallowed word can actually be far more revealing of someone’s character than the big moments.”  He later writes, "One of the reasons I think the Housewives resonates with viewers is that we show everything that happens during our production period – good, bad or ugly, it’s real.”

Cohen tosses some fun pop culture morsels at the reader. After years of trying to appear on camera, he had moved on and focused on TV production and programming. But when he began blogging about the Housewives shows after each episode, that blog evolved into his own web show which became his current late night talk show, Watch What Happens Live.  And for readers interested in learning how to pitch (or not pitch) a program to Bravo (Cohen cites Cybill Shepard’s unsuccessful strip-tease attempt for her own show as a cautionary tale) he lays out the behind-the-scenes process.

Most Talkative turns Most Boring when Cohen describes events that tend to come off as an uninteresting – the kind of extra B-roll material that you don't really need but have anyway. For one, there’s a whole unfunnyish chapter dedicated to playing a months-long prank on his mom about the time he told her he was Native American. No me gusta, Andy. In another chapter, Cohen describes what he did to throw the perfect pitch for a Cardinals baseball game at Busch Stadium.  These chapters should have been trimmed down the same way his pony-tail was cut during a makeover segment on CBS morning show.

While Cohen's career memories were insightful, this reader would have liked to have read more about his personal (dating) life. Except for some flings he had in college, Cohen doesn't reveal much about his love life in his memoir. What does he like to do on a date? Where does he prefer to go? Who's his type of guy?  Perhaps that’s more fitting for a spin-off memoir. “Most Loved” ?

PS
This review was also an excuse to repost this photo that was taken two weeks ago when I interviewed Andy Cohen for an event I hosted at Florida Atlantic University in Boca Raton. 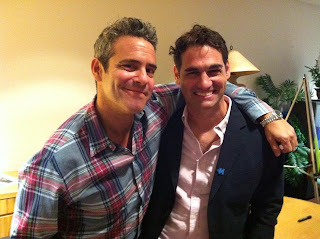