My 100 degree Adventure in San Antonio

Howdy readers! I feel like I can start using phrases like 'howdy' and 'ya'll' now I'm back from a few days at the National Association of Hispanic Journalists conference in San Antonio, Texas. It was my first time in the country's seventh largest city that charmed with its Mexican, Spanish and German history. The city grew on me despite the 100-degree temperature. The best way to describe the heat and something I kept repeating to folks whenever I ventured outside, "I feel like I'm inside a giant blow dryer!" It was like walking in a sauna but with clothes on. I now know what dough feels like inside a brick oven.

With flushed cheeks, a dry tongue and a bottle or two of water in hand, I explored the city on foot but I also hopped on the barge-like river boats that glided up and down the River Walk which threads through downtown like a pulsing artery delivering tons and tons of tourists and San Antonians.

Cafes, artisanal shops and pretty much every major chain hotel lined the tranquil mostly-shallow river/canal which reminded me of the It's-A-Small-World ride from Disney but with the state flag of Texas draping seemingly every building. Giant cypress trees tower over you as you stroll the river as if they want to bend down and pat you to say "Hola amigo!"

In fact, the downtown area looks like it was Disney-designed with the colossal stone fortress of the Alamo anchoring the city center, limestone-lined pedestrian bridges and missions that connect the wide boulevards and the buildings with Spanish-flavored architecture.

But I came here for the journalism.

The conference served as a reunion of sorts, drawing about 800 Hispanic journalists and marketing professionals from TV, radio, print and online outlets to the glass-house like Henry B. Gonzalez Convention Center (also along the meandering River Walk like everything else.)   I was part of the Authors' Carousel, where I sat at a table and peddled my book along with other writers.  Yay! 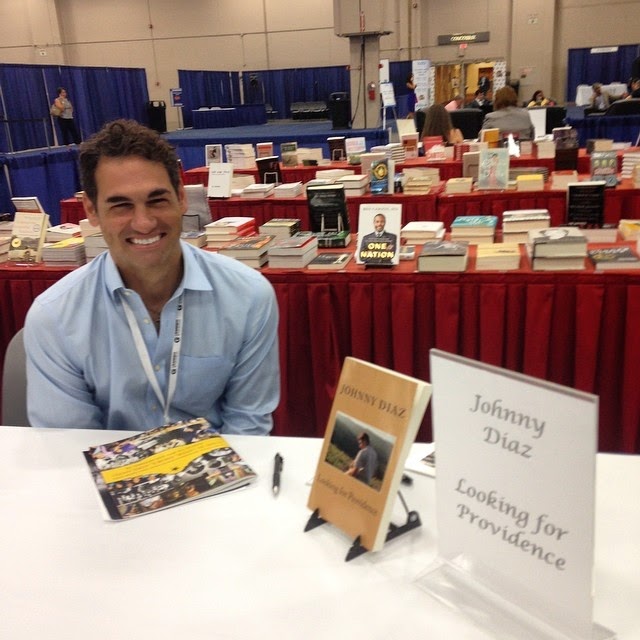 The exposure was great because the table/books were stationed in the Media Expo, where all the major TV networks, newspaper/media chains and journalism schools, had booths manned by recruiters looking for new talent (while offering free pens, pads, post-its and candy to get you to stop by and check them out.)

I also attended some of sessions/workshops including "Surviving Morning Television", which featured ABC's Gio Benitez (a fellow Cuban TV reporter from Miami), Telemundo Los Angeles morning anchor Dunia Elvir, ABC correspondent Alex Perez and CNN Morning Joe producer Jesse Rodriguez. One highlight from that session: these morning anchors and reporters often average 4-5 hours a sleep a day and catch some ZZZs wherever and whenever they can such as plane rides.  The reporters are also careful to tailor their broadcasts to play to the ear because viewers are often listening to the newscasts while preparing for their day.  As Gio told the audience, "For many people, morning television is essentially morning radio. They are actively listening."

I also enjoyed hearing Frances "Frenchie" Robles, a Miami-based New York Times correspondent and old friend, moderate a panel called "Mastering the Art of the Pitch,'' how to pitch enterprise stories to your editors.  She often finds sources and story ideas after her own stories have been published. "Good stories begat good stories. Your work product helps you develop sources," she said.

Miami-based Associated Press reporter Christine Amario was also there and shared with attendees that she often finds stories by asking everyday workers in her travels, "How was your weekend?"  Their responses can trigger a story idea such as how many Venezuelans are sending their children to the US because of that country's recent instability.  She also does at least one phone interview before presenting a story idea to her editors.

And  Roxanne Garcia, south region director for NBC News, urged reporters in her tell-it-like-it-is way to find a character who you are going to use to tell a story to differentiate yourself from all the other media out there. She also doesn't like it when reporters send her a link to an article because she doesn't have time to read it. If the pitch doesn't fit within the confines of her smartphone screen (she has a Blackberry and an Iphone) without her scrolling down, she's not interested.

There was a panel titled "The Digital Platform,'' that focused on what's the best way to target Hispanic readers online, through lifestyle stories, entertainment, news?  Short videos and entertainment-based stories (and anything to do with Shakira) seemed to be the general consensus at least for online. Oh, and good content that no one else seems to have. Boston-based Julio Ricardo Varela, who founded the Latino Rebels website, urged bloggers and writers "to create and don't worry about it. Just stay true to yourself and create, create, create." The website focuses on stories about the Latino community that the media may not be paying attention to.

Overall, it was a great conference that celebrated the 30th anniversary of NAHJ, which I've been a member of since college and I'm glad I was able to be a part of the conference for its anniversary. Despite the dry skin, the warm hospitality of San Antonians (city ambassadors are called Amigos)  made me feel like an honorary Texan. Hasta la proxima, San Antonio and NAHJ!