Every now and then, when I read a book I like (or when I have time), I write a review. Here's what I thought about the new memoir Stepdog  by Mireya Navarro. 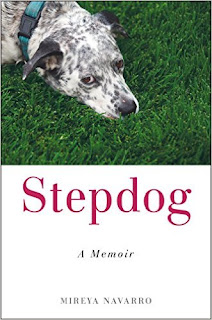 In the Sterngold/Navarro household, who is top dog? Two married successful journalists? Or a quirky spotted dog named Eddie?

That’s the theme in the memoir “Stepdog” where New York Times reporter Mireya Navarro recounts her adventures (more like misadventures ) with her husband’s dog Eddie, a passive-aggressive pooch with the grey markings of an Australian cattle dog.

As Mireya tries to blend in with her dreamboat’s family as a stepmom (or madastra) to two children, she finds a nemesis in Eddie who does his best to push her out and keep Jim Sterngold for himself.  Mireya tells her story in a light, breezy way. The writing flows and keeps the reader on a loose leash so you stick around for the ride.

The story starts off quickly in introducing us to Eddie who pees outside their bedroom door. But then the book begins to drag like an English bulldog on a sidewalk during a hot summer day as she explains how she met Jim, moved to LA and began to adapt (or fight) with the dog.

But despite the title, I don’t think the book is so much about the dog. It’s more about stepping into a new family situation and finding your place. In Mireya’s case,  it’s about balancing the roles of wife and stepmom and how she fit into those designations after being single and independent  for so long.

From reading her experiences with the dog, Eddie didn’t sound that bad. (Food is always the best way to a dog’s heart which she learns toward the end.)  Or perhaps the author left out the really really bad stuff. But could the dog have been picking up on Mireya’s uneasiness in the new household and projected that back to her? I always believed that the energy you put out comes back to you.

Although I enjoyed reading the book and I appreciated learning about the author’s Puerto Rican background and her rise at the NYT newsroom, I cringed (almost growled...Grrrr.) while reading some moments of meanness toward Eddie.

In one scene, she refers to him as “Edweirdo.”  When the couple consider moving back to New York from Los Angeles and thinks the dog won’t be able to adapt to the city, she says “I saw my chance to get rid of Eddie. I needed to just plant the idea.”

Once they finally move to New York and split their time between Montclair, New Jersey where Eddie stayed, she recounts how “I felt like a mistress” every time Jim left her New York City early on the weekends to walk and feed Eddie back in Jersey.  I applaud the author for being so honest but scenes like this made me want to root for Jim and Eddie more. (Sorry chica.)

Toward the end of the book after two health scares (one with Jim, the other with the dog),  Mireya finally caves in and accepts Eddie because “Eddie was an extension of the husband. So were the children. I surrendered,” she writes.  “But I couldn’t help loving him for loving Eddie…there he was, smitten with this strange creature.”

The book was my end-of-the-day bedtime literary snack and Mireya’s new attitude toward Eddie was welcomed and sweet as a doggie treat. So were the pictures of Eddie at the beginning of each chapter and the ones with Eddie and Mireya together.  How could she not love that spotted face?

Disclosure, I was a little more partial toward Eddie in most of the book because I love dogs even though I don't have one. (I'm a sort of a stepdad or godfather (dogfather?) to this little Fox terrier pictured below who likes to lick me a lot, toss a tennis ball my way while I watch the news/Netflix and sleep on my head.) 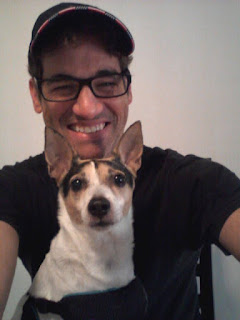