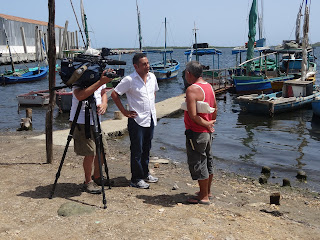 Conan O'Brien, Shark Week, Discovery's Cuban Chrome, and now a new Starz drama. US TV networks and shows have been descending on Cuba lately to shoot episodes and specials.

I wrote a story about the trend and why there's more interest among the networks as well as news outlets to shoot in Cuba.  CNN was down there for an episode of Anthony Bourdain's travel show Parts Unknown.

And South Florida ABC affiliate WPLG Channel 10 had a crew spend 15 days in the island nation to shoot a special series called Historic Access: Cuba Coast to Coast' which aired this month. (The photo above is of Ch. 10 reporter Hatzel Vela interviewing a fisherman in the province of Sancti Spiritus.)
Posted by Johnny Diaz at 12:10 PM