How I Got The Covid Vaccine and Some Side Effects

It was just past 11 a.m. on Saturday when the Facebook post popped up on my news feed.

It was from a fellow journalist Marc Caputo who said that he was at the Florida City Youth Center where workers were providing Covid-19 vaccine shots, no...questions...asked. Of course, I read in.

"What?" I thought to myself.

He  posted a photo with the city's police chief who had confirmed the same thing to him. Mr. Caputo said he was waiting in line, which was about 40-people deep.

So instead of watching my usual Grey's Anatomy reruns on Netflix with my doppio espresso and croissant from Starbucks, I made a run for it. I didn't even give myself time to change my clothes (baseball cap, tank top, shorts and sneakers sans socks.) I grabbed my wallet, keys, phone, mask and cup of water and hightailed my Beetle to Florida City.

I got there in about 30 minutes (there was no traffic, really!) As soon as I got in line, I saw that it gradually began to centipede down the block.  I was about the 40-something person in line.  To my surprise, ahead of me, I recognized a familiar face and mop of straight black hair, former radio news host and regular MSNBC political commentator Fernand Amandi whom I had interviewed a few times when I was a reporter at the South Florida Sun Sentinel. He was in line with his lovely wife Chenell.

Just as I was about to reintroduce myself (we didn't immediately recognize each other with our masks) Marc Caputo emerged from the center with a band-aid on his arm and his CDC Covid test card. I and others in line thanked him for his post. His post was a life saver.

While we waited, the Amandis and I caught up and talked about our pandemic year, the pros and cons of working from home, not wanting to leave our homes in the Miami area and the idea of always to continue to wear a mask on planes after life gets back to normal.  (That's Fernand and myself in line on Saturday. I was holding my organizer filled with documents that I indeed was a Floridian.) 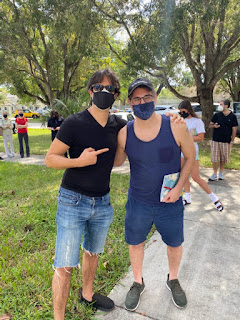 After standing in line for about an hour where I also bumped into Miami filmmaker Billy Corben a few rows back, we finally made it inside a room at the center where FEMA workers and nurses awaited. They asked me for my Florida proof of residency (my driver's license) and medical questions that involved allergies and whether I had been diagnosed Covid and treated for it.  I kept thinking they were going to ask me for medical documentation (which they didn't and I didn't have). I was prepared to pull down my tank top and show them my scar from my recent heart surgery. But that wasn't necessary.  I was asked which vaccine I wanted and I went with the one-time Johnson & Johnson shot.  Johnson & Johnson & Johnny.

A few minutes later, a lovely nurse asked me where I wanted the shot (my left arm) and she asked if it was okay to do it on my shoulder tattoo which she thought was dolphin but was a shark. (Happens all the time.) Another nurse said she was happy to take a photo of me as I received the shot.  The needle on the syringe looked really long and I was a little nervous. But I didn't feel a thing. It was over before it even started. I was relieved and I felt I had some peace of mind. I had to wait for 15 minutes at the center (which I spent chatting with Billy bout his upcoming documentary called Kings of Miami and Netflix) before leaving to make sure there were no immediate adverse effects. The process was easy, smooth and the staffers were friendly. A Saturday morning well spent. 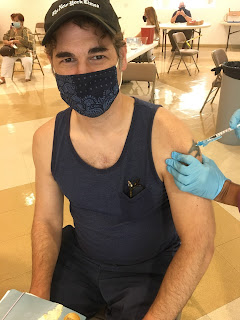 Like so many other people around the country, I was scared of catching the virus but even more so after I had open-heart surgery last August at Mount Sinai Medical Center in Miami Beach. My doctors had warned me I was at high risk for catching the virus given the surgery and living in South Florida (which has had high infectious rates) so I did my best to stay even more indoors than pre-surgery.  At least this Covid-19 vaccine will add an extra layer of protection and that soothed my fears, anxiety.
And like so many other Floridians, I was confused about when and where I could get the shot. I kept hearing different requirements from Miami-Dade to Broward counties which border each other. At first, it was intended for people over the age of 65 and then that expanded to include front-line workers and public school teachers (like my sister) over the age of 50. But some sites were offering people the vaccine if they were over the age of 18 and had documentation from a doctor that they were at high risk.
During my recent physical, my primary doctor said that she would support me in getting the vaccine because of my medical history (ulcerative colitis, bladder cancer, high blood pressure and aortic aneurysm. I'm a Grey's Anatomy storyline waiting to happen.) I thought I would have to wait a while for my shot at the shot. (pun intended.) But when I heard about the Florida City FEMA site doling out doses to anyone over 18, I took a chance and dashed over.
I wasn't the only one. Word about the site spread like wildfire on social media, resulting in lines of hundreds people.  More than 400 people got the shot the same day I did. The next day, the site returned to the state's original requirements and people were turned away. The secret was out and the story became local and national news including my newspaper, The New York Times.
I am glad I got the shot but it did come with some apparent side effects. The day after the shot, my back and arms ached. By early Monday morning, I felt fatigue and the muscular ache had spread. I also had chills. I told my doctor and she said that was common among people who got the vaccine and if the symptoms hadn't gone away after two days, to let her know. Most of Tuesday, I still felt feverish and a little achey but I feel better now as I write this. I shared this with my cousins in Boston where they were getting the same Johnson & Johnson vaccine this week.
People in South Florida have asked me on social media how did I get my shot even though I am not 65 or over 50. These are some sites I recommend. They include Broward Health in Fort Lauderdale where you can make an appointment even if you are over 18, CVS, and Dr. B which matches people with clinics that have leftover vaccines.  My old paper The Miami Herald has been reporting on the various sites such as Miami Dade College North, Overtown, Florida City and Sweetwater (suburb west of Miami) where you can get a shot, with or without an appointment.  And Miami on the Cheap has been updating where people can find the vaccine in South Florida.