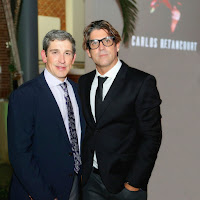 Richard Blanco is a word artist. Carlos Betancourt is a visual artist. The friends and former partners have inspired one another in many ways for more than 20 years. That creative and personal connection will be the focus of a discussion and reading event called Between Friends/Entre Amigos this Saturday at Books and Books in Coral Gables.

I wrote a preview of the event for my paper the Sun Sentinel.

One of the collaborations that they will talk about was a series of photos that Carlos snapped of a shirtless Richard on Miami Beach in 2005. (One of the images became the cover of Richard's book of poetry Directions to the Beach Of The Dead (Camino del Sol).

And some of Richard's writing was inspired by Carlos such as the poem Cheers to Hyakutake  about a camping trip they took to the Everglades where they discussed the universe and life under the stars.

Richard is probably best known these days as the inaugural poet for President Barack Obama in 2013.  The Cuban-American was first gay and Latino inaugural poet in the US.

And if Carlos, a well-known mixed media artist in Miami, looks familiar, he was named one of People magazine's most beautiful peeps back in 1995.  He had that flowing Hercules mane of hair then. I also remember that this was a big story, especially in Miami, at the time. 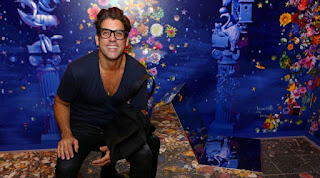