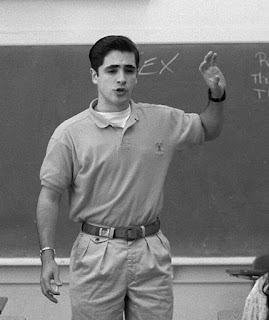 Steve Rothaus, an old friend and a former colleague of mine at The Miami Herald, recently co-wrote a story about a scholarship fund named after the late Pedro Zamora.

He was a Cuban-born Miamian best known for his HIV advocacy and for appearing on MTV's The Real World in 1994 when he shared his own struggles with the disease.

I never met Pedro but he had an impact on me and so many of my fellow gay friends who also grew up in Miami during the 1990s.

In 2007 shortly after I started this Beantown Cuban blog/site, I wrote a little tribute about Pedro for World AIDS Day.

I am reposting it below to honor his spirit and his work which continues today through others as Steve's recent article points out.

A psychic once proclaimed that Pedro Zamora was born to save lives. I know many who can attest to that.

Pedro died last month 13 years ago, the day after the final episode of The Real World: San Francisco aired. He died from complications from AIDS after a three-year crusade to educate folks, especially young people, about the illness.

You don't hear much about Pedro anymore. The years have passed. There was a street named after him in West Miami-Dade. A former clinic in Boston also carried his name. MTV no longer shows the reruns from his season.

Sometimes, I can't help but wonder what a positive role model Pedro would be today to a whole new generation of young people. He showed people that AIDS was everywhere. Young or old, gay or straight, it's there. And a few moments of pleasure could never be worth risking one's life. He also taught people how to avoid catching the virus - and how to deal with people who had it.

He made an impression on me right away when I was 20 because I saw a little of myself in him. We were both Miami Cubans, about the same age and gay and I was just beginning to embark on the real world of dating. (We also had the trademark thick dark eyebrows.)

When The Real World cameras highlighted his tight-knit and affectionate Cuban family, I saw some of my own family reflected in his. Pedro's thick Cuban accent was music to my ears, part of Miami's soundtrack. He was on The Real World when cast members had real stories to tell besides the I-got-drunk-and-hooked-up-with-so-and-so tales.

I always wished I could have met Pedro. If I had, I would have said "Gracias chico!" for educating me and so many of my fellow friends in Miami and beyond.