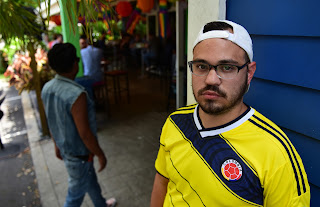 South Florida's gay community had a mix of reactions to the Orlando mass shooting at a gay nightclub. A lot of the people I interviewed for this story said that it could have easily happened in South Florida, which has a large gay and Latino population.

I immediately thought of all the times my bestfriend Racso and I would dance at Boston's gay Latino night on Wednesdays because it was one of the few places where gays and Hispanics gathered to have fun and meet one another, where you can hear Shakira, Pitbull and Enrique Iglesia remixes. It reminded us of the Miami nightclubs where Latin pop music is a given.

We'd go out to Boston's Latino night to dance, drink, let loose and more importantly, feel safe in our little gay sanctuary.  (And of course, we went to check out the sexy Brazilian guys.) But I digress...

The photo to the left is of Michael Kareff, a young man I interviewed outside of Rosie's Bar and Grill, a popular gay brunch hangout in Wilton Manors.  He had been at The Manor the night before in Wilton Manors for their Latin night. The shooting dominated conversations Sunday as well as today.

Below are the front pages of The Orlando Sentinel and Sun Sentinel.