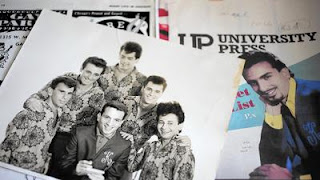 Can you get a second shot at your first act? For Kal Fagan, the answer is yes.  I wrote an article   about this 78-year-old graduate student who once managed a 60s rock'n'roll band called Robby and The Troubadours. While studying music administration at FAU, he struck up a friendship with a Grammy-winning audio engineer who remastered the records from Robby and the Troubadours into a CD. So Kal is hoping the group will finally make it big by rereleasing their songs and appealing to new fans.