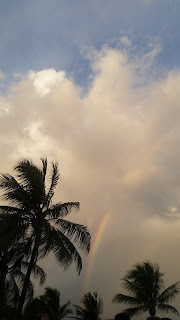 I'm just coming off from a few days at the NLGJA conference, an annual gathering of 200-something gay, lesbian, transgender journalists and media professionals.

It's been 10 years since the conference was held in Miami Beach and 2006 was my first introduction to the group. So I'm glad the conference came back full circle to my hometown where I now live. (I was also glad because it made for a really easy commute - 24 minutes!)

As I've written before, the conference is like one big gay reunion, a media brotherhood/sisterhood but with notepads, pens and lots of Coca Cola products (Dasani water, Sprite, etc) because Coke was one of the sponsors.

I got to see old friends from other newspapers, TV stations and networks so the conference serves as a non-stop catch-up session over three days at the posh beachside Ritz-Carlton South Beach.

But there were workshops too, A LOT of workshops, and I got to attend a few (and I was even on one of the panels but more on that later.) And because I'm a writer, I couldn't help jot down notes wherever I went.

In the Homophobia in the Caribbean workshop, I learned a lot about JFLAG, the nonprofit Pride group in Jamaica and the work they've done to make it easier for gays/lesbians to come out or at least talk about being gay in their native country. One study by the group found that only 18 percent of Jamaicans appreciate/accept/tolerate LGBT people and that over 60 percent of LGBT folks don't report harassment. PRIDE in Jamaica doesn't garner much news coverage in the country or internationally which spokesman Jaevion Nelson hoped that would change by speaking at the conference and sharing the group's story.

On a more somber note was the Reporting on HIV and AIDS Today: Latinos at the Crux of the Epidemic panel which was moderated by Diane Anderson-Minshall. I learned that Miami-Dade and Broward counties lead the country in new HIV infections and the counties are third and fourth in the nation of new AIDS cases.  "We are still looking at the equivalent of five 911s of people dying each year of AIDS,'' said Dr. Stephen Fallon of Latinos Salud, a nonprofit that works with gay Latinos in South Florida. But what really stuck out for me was that Latino gay men in Miami-Dade live only half as long as nonminorities after an AIDS diagnosis.  The last panelist of the group was Maria Mejia, a Miami-Colombian woman who has been HIV positive since she was 15 in 1988. She shared her story and how she now empowers others who are positive that life is worth living and not to be ashamed.  "I have no shame whatsoever for having HIV. I'm a survivor. This is a human condition that affects us all."

Other workshops I attended included Making the Most of Google Tools which presented how one can refine their searches from within a site, looking up legal and scholarly documents and using the Search by Image to trace where photos come from. (Very Catfish-like.)  But the one feature that all the guys and gals were buzzing about was the video on the Google Translate app which instantly translates whatever word that appears in an image on your phone.

Not everything was HIV, homophobia and Google.  At a workshop called Writing for the Ear which was standing room only, Mo Rocca from CBS's Sunday morning show talked about he interviews celebrities and writes transitions into his stories

He said he gets four minutes to 11 minutes to tell a story and he's given about three weeks to work on them before they air. With celebrities and profiles, the less track, the better.  "I think transitions are overrated. I think it 's nice to make a hard turn,'' he said of story packages.  He also noted that he enjoys jolting an interview a little bit by abruptly asking a question that is off-topic such as "What's your favorite pet?" or "What do you think of (insert celebrity name?)"   He added, "It's nice to ignore those expected transition lines and try new topics."

And finally, I was on a panel called How To Be Your Own Best Editor which was moderated by author and New York Times Magazine writer Benoit Denizet-Lewis and featured writing instructor and author Valerie Boyd, author Craig Seymour and Daily Beast editor and writer and author Tim Teeman.


Some of the tips that I walked away with from this session:

"Reading your story on different devices" such as your phone, iPad or desktop as part of the self-editing process, said Benoit.

"Trusting your instincts" when it comes to writing and editing, said Craig.

The importance of "peer to peer editing" and having a colleague read over your copy before sending it to your editor, said Valerie.

And Tim emphasized having a conversation with your editor before writing a story so you have a good sense of what the story should be. He also underscored picking your battles when you don't agree with a suggested edit.

I suggested reading your story outloud (which I do in my little orange Fiat) and reading it outloud with your editor as she/he edits. Your ear will catch what works and doesn't work.  I also like to print out my story when I am close to being done and then I leave it alone for a little while unless I'm on a hard deadline. (It's a great time to get some coffee or water from CVS) and then I reread the copy with fresh eyes.

Overall, it was a great conference despite the intermittent rain showers.  (Florida isn't the Sunshine state. It's the partly overcast state.)

I learned a few new things and got to see old friends and made some new ones.

Until next year in Philadelphia.