Catching up with Danny Pino of FX's 'Mayans M.C.' 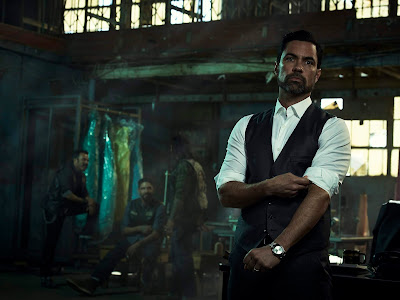 'Law and Order:SVU' fans may remember Danny as detective Nick Amaro who investigated sexually-based offenses for an elite squad in New York City.

In this new role, he plays drug lord Miguel Galindo who tries to balance his family life (husband and dad) with running the Galindo cartel on the California-Mexico border. The leather-clad Mayans Motorcycle Club chapter is under his control and the bikers carry out his orders on both sides of the border town.

I interviewed Danny about the layers of complexities that his character presented and how he was able to capture that on screen. For those of you unfamiliar with 'Mayans M.C.', it's the spin off of the network's popular series 'Sons of Anarchy' which ran from 2007-2014 and starred Charlie Hunnam.  Both series are like gritty soap operas for bikers. (photo above courtesy of James Minchin FX.)

In my interview, Danny also talked about his upcoming guest appearance on Netflix's reboot of 'One Day At A Time.'  In that series, he plays Rita Moreno's son Tito.  My Sun Sentinel interview with Danny is here which also includes a photo gallery of his most famous roles.

Below is a trailer for 'Mayans M.C.'