The Car That Could

Everyone remembers and shares beloved stories about their first car. I paid tribute to my old blue 1982 Honda Accord  and what it meant to me in the short time (three months) that I owned it. And everyone has a favorite car, one that they wax nostalgic.

But what about your best car, the one that rarely let you down and hung in there with you in good and bad times.  For me, that was my college car, the 1990 Toyota Tercel EZ. I think it was called the EZ model because it was easy to buy: It barely came with anything except an AM/FM radio, A/C, stick shift, vinyl seats, one side passenger mirror and sunvisor. It was the brown paper bag or the most basic of Tercels and Toyotas for that matter. A silver hatchback with sharp angles, almost like a triangle on four wheels. 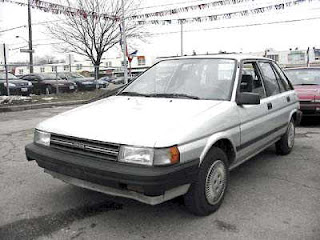 When I was 18 and starting college, I needed a newer and more reliable car than what I had, which was a first generation, cinnamon brown 1980 Toyota Tercel which was on its last wheel. This one had been a good workhorse for my sister and me at Miami Beach High but it was approaching 100,000 miles and I didn't think it was going to put up with commutes for college and my internship at The Miami Herald.

So my family and I headed to Expressway Toyota in Miami and looked at used cars that were slightly new. And there it was, the adorable little silver Tercel sitting amid a bunch of bigger Corollas and Camrys.  It was two years old and had a few thousand miles so it was almost new.  When I sat in side and test drove it, I knew this was my car. (And so did my mom who wanted it for herself.)

This third generation Tercel was great on gas, filling up with a handful of dollars. The A/C was ice cold. The car puttered along with its 1.5 liter carburetor engine. Although it didn't have a lot of horse power, it had Johnny power, thanks to my stick-shifting skills.

I drove the car everywhere, to Miami Dade College, and then between the two campuses of Florida International University at opposite sides of the county (about 80 to 90 miles a day). The car was perfect for reporting stories at The Miami Herald in Miami Beach and then the Hialeah and Miami Lakes office in west Miami-Dade. I could squeeze the Toyota into any spot. Despite its small size, it could easily store two bikes in the hatchback and about five people overall. 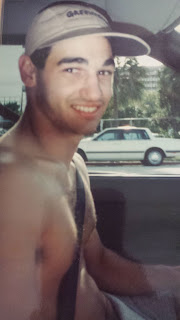 The car was the club mobile for my friends (Cindy, Karla) and me during our night outings in South Beach and Fort Lauderdale. The Toyota was there for a lot of first dates.  The Tercel also held up when I drove it up the East Coast to Boston for my first summer internship at The Boston Globe.  I felt pride driving through Harvard Square, the Globe parking lot and to the South Shore in this little car with the Florida license plate. And the car was a pro for trips to Key West even under relentless pounding rain.

The car never broke down. My cousin Pancho performed the oil changes and tune ups in front of our house. The only issue the car had were the brakes. I had to replace them almost every other year but I blame that on my rough driving. I treated the car like a wanna-be roadster.

When I graduated from FIU, I wanted to treat myself to a car that could actually reach 60 mph in less than 2 minutes. Growing up in Miami in the 1980s, I remember seeing the sleek Nissan (Datsun) 240.  I wanted one and there was a recent model out from Nissan.

"Johnny, think this through. Your Toyota can go another 100,000 miles. It's paid off. It's a good car,'' my dad kept advising me. But I insisted. I wanted to start my adult life in a new set of wheels. And my Tercel had about 115,000 miles and things were beginning to wear and tear and needed replacing.

I kept hearing my dad's voice in my head at the Nissan dealership. (He was also right next to me so that may have had something to with it.)  And so, I turned in the Tercel. I felt pangs of guilt for abandoning this little car that had been so good to me for almost five years. But a black Nissan 240 beckoned and called my name. Shortly after I got the Nissan, I would drive by the dealership, hoping I could see the Tercel on the used lot but it was gone. It probably went up to the big junkyard in the sky.

Once in a while, I see a red version of that Tercel driven by an elderly man in Little Havana. Before my dad died in May, we often talked about cars and my old Toyota often came up. And again, he'd say, "You should have kept that car."  I think he was right. It probably still would have been up to driving me to Key West, Boston or to help me report my news stories in Miami and Fort Lauderdale. 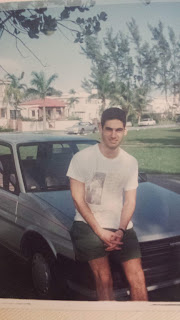