Ever since I moved to New York City a few months ago, I've noticed certain cars. Not shiny brand new vehicles and leases that have rolled off the lot. Not the typical classics and collector's cars that are shown on TV auctions. And definitely not the tiny Minis, Fiats and SMART cars that owners amazingly squeeze into the tightest of spaces in Manhattan, although they have a charming toy-like cuteness about them.

The cars I've noticed during my walks in the Upper West Side on my way to work and back or while I run errands stand out to me because I remember when they were first rolled out. In a way, they remind me of certain years in elementary, middle and high school. Even college.  These are classics in their own way. Chances are that the average person would overlook them. But to this car aficionado, they are retro cool, flashes of the past.  (Below is a late 1990s or early 2000s Chevrolet Cavalier that I noticed on my block the other day. It looks new!) 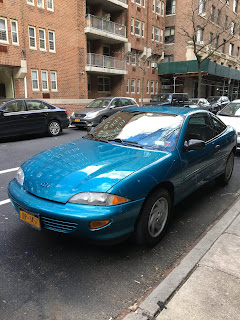 Whenever I spot one of these time capsules on wheels, I stop and marvel at how their owners have kept them in such good shape. It's as if they've emerged from a showroom or released from a garage where they were preserved from New York's weather.  I think the expensive nature of living in the city perhaps made these owners really take care of their vehicles and they have held onto them for as long as they can as in decades.

Here are some of the cars from days gone by that have caught my eye during my neighborhood strolls. I will add to the list as I encounter more. I have seen others but sometimes, I just need to rush and catch my train.


Acura Integra: My guess this model is from the late 1980s (1988 to 1990?)  I've seen the owner, an elderly man, move the car from one side of the street to the other during the week for the city's regular street cleaning. The car appears to be in mint condition. The headlights still pop up like eyebrows. I didn't notice any scratches. The car gleams in white. Speaking of white, the white building in the background is where I live. 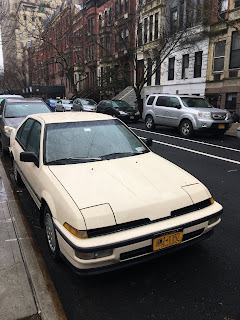 Cadillac Coupe de Ville: I've also spotted this car on my block often. It's definitely from the mid to late 1970s because my uncle Frank had one when I was younger and it offered one of the smoothest rides, like a boat on wheels gliding down the street. Amazingly, this Cady still runs because, the owner also parks it from one of the street to the other. It's a little car dance that NYers must do to maintain a vehicle in the city. 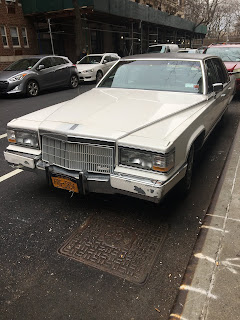 Volkswagen Cabrio: This car is a throwback to the early and mid 1980s. I remember seeing the convertible in high school and college movies such as "You Can't Buy Me Love,'' the nerd-to-stud-makeover movie with Patrick Dempsey in 1987. (I also liked the movie because it was great seeing another guy with similar dark curly hair in a movie.)

It's rare to spot these VW gems on the street anymore unless you go to a VW car club meeting or to a classic car show. I spotted this particular Cabrio on my way to Starbucks on Columbus Avenue. 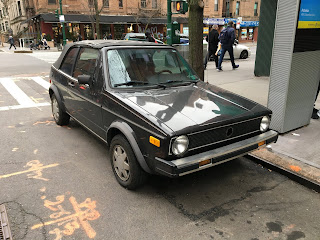 Plymouth Neon: Again, spotted on my block. This compact was all the rage in the mid 1990s. Plymouth rolled it out as an economical sedan aimed at younger buyers. I remember the car's badge was in purple. Although it was adorable (at least to me), the car wasn't very reliable, according to friends who have owned it. Yet it still had that cute factor with those big round lights. It looks like it's grinning, no? 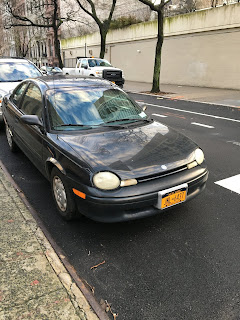