I spotted my Uncle “Tio” Agustin playing an extra in the Miami Vice episode “Nobody Lives Forever” from season one episode 21 on Peacock from 1985. He is wearing the light blue suit. In the scene, he passes a package under the table to another guy, a bookie, and walks away.

My uncle was my dad Juanito's older brother. Both of them worked for decades at Puerto Sagua restaurant in South Beach. My uncle had the morning and early afternoon shift and my dad had the afternoon and evening shift. They looked enough alike that people confused them. 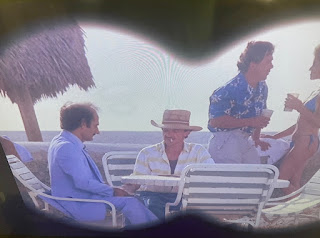 I accidentally found my uncle because I have been binge-watching all the episodes of "Miami Vice" on the Peacock streaming service. I was nostalgic to see the Miami of my childhood and so I embarked on watching a few episodes a day. I'm currently on season four which took place from 1987 to 1988.
Growing up in Miami Beach in the 1980s, "Miami Vice" became a regular fixture on city streets, especially Ocean Drive, Biscayne Boulevard and in Key Biscayne. A lot of the shoots were at night and residents and tourists would see big white trailers parked along a street which signaled that the show was shooting nearby.

I remember one time, maybe 1989, they were shooting the show in an estate on Pine Tree Drive around the block from my parent's house. I remember seeing the production trucks parked along the street as I tried to get a view of the action from a bridge that overlooked the waterfront house where they were filming. Some trees obsecured my view but I was so excited to see something that I would watch on Friday nights on NBC to be so close to home.

Some of my observations from rewatching "Miami Vice" these past few weeks.

Sonny (Don Johnson) and Tubbs (Philip Michael Thomas) always seemed to get involved with a woman who was somehow connected to their current investigation (or a past case) which complicated things. You would think they would have learned this after the first season.

To my surprise, I have heard of some unsavory language which would probably not make it on air in today's standards. In one scene, a boxer calls his crime thug boss "maricon." In another episode, a thug called a hooker "puta sucia."

The crime bosses were mostly Latinos with names like "El Gato" and "Cinco" and "Rivas" and "Calderone."

The show featured a lot of stars before they became huge stars. They included Liam Neeson, Bill Paxton, Wesley Snipes, Annette Bening and Melanie Griffith (who would later have her daughter Dakota Johnson with Don Johnson.)