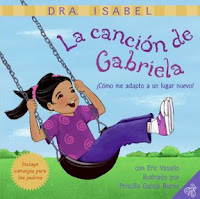 After a natural disaster forces Gabriela and her family to immigrate to the United States temporarily, the little girl is frightened. She'll have to leave her bestfriend behind, board a plane, learn a new language and adjust to a new life and culture. But Gabriela has a way of coping in her new home: She sings a song that calms her. And her song may help other kids who don't speak English adapt to their new surroundings. (Think: Dora the Explorer's sweeter and cuter cousin.)

Gabriela is the main character in the new children's book, La Cancion de Gabriela which has just been published by HarperCollins. The book was written by Univision radio's La Doctora Isabel Gomez-Bassols and her son, Eric Vasallo. You might know la doctora as the angel of the airwaves. She's a national Spanish radio psychologist and she gives her callers advice on relationships, raising teenagers, alcoholism, and coming out of the closet. But Isabel often receives calls from Latinas who are trying to help their kids adapt to the United States or deal with trauma from a natural disaster. A mother of four adult children, grandmother and a former Miami-Dade public schools child psychologist, Isabel knows something about helping kids.

The lushly illustrated book, which looks almost like a literary cartoon, takes the reader on Gabriela's journey from her home in Latin America where a volcano and strongs winds force her and her family to relocate to an aunt's house in the United States. We see Gabriela nervous on her first day at school where she sees students who look like her and some from different backgrounds and races. She feels at home there. We see her make a new friend who is scared of rain as she was. We follow Gabriela as she learns a song, Gabriela's song, which centers her whenever she's scared.

What makes the book unique is that it was written by a Cuban mother and her son. Isabel has written several self-help books over the years but this time, she wanted her son Eric Vasallo, a Miami screenwriter, to take the literary helm and collaborate with her on this book, a family project.

I asked Eric some questions about how he wrote the book, which is aimed at kids ages 3-8.

Why did you and your mom write this book?

To speak to Latino children struggling with issues of immigration and/or assimilation into the US. We also wanted to deal with the fear of natural disasters which is such a hot topic and real issue for anyone living on this increasingly hot planet.

What do you hope your young readers will learn from La Cancion de Gabriela?
That change is inevitable, whether it be caused by natural disaster, economic reasons or forced immigration due to a political situation, which are the main reasons latinos emigrate to the US.

What was the writing process like for you? Was it difficult to write in a way that would speak to children?
Extremely, I am used to writing screenplays which allow you to delve deeply into any topic you are inspired by, so it was mainly difficult to write about one simple and non-controversial topic. What helped was poring through different books at the children's book section and getting into that simplistic mindset. Our storyline of dealing with a natural disaster was inspired by a recent event at the time, in Guatemala where thousands were displaced and hundreds were killed due to flooding. It was also shortly after Hurricane Katrina occurred so I decided that since Global Warming isn't going to get any better any time soon,this would be an issue that terrifies children and the best way to tackle it is to deal with the "fear" that these events cause.

Our intention was to calm kid's fears in dealing with Mother Nature's potential wrath. Since my mother is a radio personality, she would get inundated with calls from parents on how to talk to their kid's about natural disasters, (hurricanes, floods, etc). Parents simply did not know how to speak to these children to calm them or to even explain the effects of these events in a way that would not traumatize them. This is how Gabriela's Song was created. It was meant to be a sort of calming mantra for children to repeat to themselves, much in the same way I would repeat my prayers of "Our Father" when I was too scared to go to sleep at night when I was a child.

The original unchanged version of the song is, "Kikiriki-Kikirika, yo no tengo miedo, esto no es na'a!" repeat over and over, breathing deeply as you chant, until you feel calm. This should calm anyone regardless of age and can help deal with any and/or all fearful situations.

Do you have any advice for aspiring writers who dream of being published one day?
If you're lucky to get an offer or interest from a publisher, swallow all of your pride, disconnecting emotionally from your work and just do what they say in order to get published. Once you are published and have a name in the literary world, then you can call the shots (or at least some of them). Until then be as professional as possible, don't take editor's comments too much to heart and more opportunities should come your way. The only time I would put my foot down is when an overzealous editor takes your work and completely changes it to their liking, not even keeping one of your original words or phrases. Then I would say take a stand and work with the editor to re-write it yourself. Don't accept for them to completely change your work. Also,if you have to write about something, just write about what you love. Use what you have learned to teach or inspire others and then flourish on it. Writing is as easy as that. Just share your stories in your voice and above all, be confident!

If you're interested in learning more about the book, which could also be used to teach Spanish to children, click here.