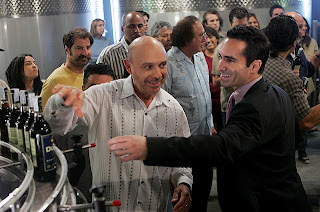 When the new CBS drama "Cane,'' debuts Tuesday, Cuban-Americans as well as fans of nightime soaps will be tuning in, holding the show to a higher and more complicated standard than other new dramas premiering on network television. For one, the show is a rarity on primetime television: It follows the fictional Duque family, an upscale Cuban-American dynasty that runs a rum and sugar empire in South Florida. With a high-caliber cast that includes Jimmy Smits, Hector Elizondo,and Rita Moreno, the show features the largest Latino ensemble on American television. Actors switch from English to Spanish and some Spanglish, with and without subtitles. The series is also the first prime-time drama to focus on the Cuban immigrant experience. And that has local Cubans and bloggers divided over how well their community will be portrayed.

I have a story in today's Globe about how some Cubans have been conflicted about the show, which has been described as a Cuban "Sopranos" or a Latino "Dallas." When I interviewed Cynthia Cidre, the show's executive producer and the screenwriter of "Mambo Kings," she said she wants the show to be pure entertainment and not about Cuban politics. To read my story, click here.
Posted by Johnny Diaz at 2:45 PM