Some more of Shemar Moore 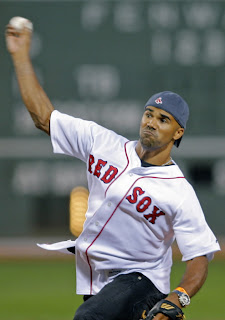 This is a shameless excuse to repost my entry on Shemar Moore, whom I interviewed a few months ago before the relaunch of CBS's "Criminal Minds." After learning that the show is taping fresh episodes for April, I thought it would be a good time to write about him.
Shemar Moore was born in Oakland, California and lived in Denmark and Bahrain before his mom settled down temporarily in Boston, her hometown. It was here where he learned to play baseball, throw snowballs and bonded with his uncle and cousins. Shemar considers Boston his home and he visits his family here a few times a year. You may recognize his handsome face. Shemar was Malcolm on The Young and The Restless for eight years and now, he's an FBI agent on CBS's Criminal Minds.

I had a story in the Globe on how Shemar Moore has roots in Boston. Who knew? And how he had aspirations for a pro-baseball career. He was in Boston two weeks ago to promote his show and to throw the first pitch at Fenway Park for the Red Sox. He was exhausted when I interviewed him the following afternoon at the Taj Boston Hotel in front of the Boston Public Gardens but he pulled through, answering my questions completely and thoughtfully and offering me more time in case I had more questions. I think a lot of people will be surprised to know that he's from Boston, that his first language was Danish, and he is biracial (father is white, mother is black.) And that's what I love about my job, learning new things about people we see or should know "Moore" about and sharing their stories. To read the story, click here. 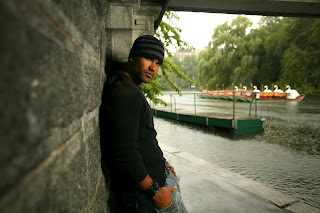 (photo of Shemar at Fenway and Boston Public Gardens from The Boston Globe.)
Posted by Johnny Diaz at 4:18 PM