"Johnny, you're a good writer! Your sentences are simple and concise. Your writing has rhythm. Have you thought about joining the school newspaper?" suggested Mrs. Comeau, my tenth grade English teacher.
I was surprised by her compliment and it replayed in my mind even with her North Carolinian infectious drawl: You're a good writer!
Me, a curly-haired fifteen year-old with suspenders? Nah. Writing was purely for homework and essays, something a teacher assigns in class and not something to be (gulp!) enjoyed. Mrs. Comeau was commenting on an essay I had written on how I would love to interview Barbara Walters one day. I never thought I would actually be good enough to be a journalist like her. My goal was to be an accountant because I was in all the advanced math classes in middle and high school. I enjoyed plugging numbers and graphing Algebraic formulas.
But Mrs Comeau's words rang loudly inside my head like the bell signaling the end of the school day.
So I took Mrs. Comeau's advice to heart believing it couldn't hurt. She must have been telling me this for a reason because she said it with such caring sincerity. I joined the school newspaper staff shortly after, curious to see where this all might lead. 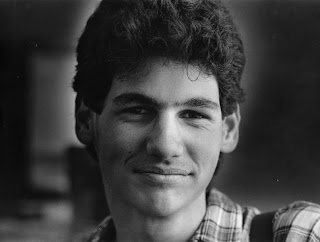 At first, I didn't know what I was doing. I had to pelt my story subjects with who, what, where, why, and how questions. What was that all about? Then I had to write these things called articles using the inverted pyramid style of newspaper stories. I didn't get that either because the formula seemed to hamper my creative writing process. The pyramid format chopped up my sentences and order of facts instead of giving them a lyrical flow. Journalism was this special language that I couldn't seem to de-code. Whenever I handed in a story to my journalism teacher, the article bled red ink. All these rules and journalism formulas didn't add up for me. The class should have been called Frustration 101 and not Beginning Newspaper.
But I kept remembering what Mrs. Comeau had said, "You're a good writer..." Those words acted as gentle nudges pushing me to keep writing.
I thought about my essay on Barbara Walters and what made that different. It was conversational, simple, and yes, it had a rhythmic cadence. In a nutshell, it was enjoyable to read like scenes in the books I had read in Mrs. Comeau's American English literature class. So I began writing my articles that way as scenes or chapters in books but with a beginning, middle and end. I opened the articles with quotes from the person I interviewed or sprinkled them with quick engaging hooks (leads?) to engage the reader. I treated the articles as intimate conversations on paper between the reader and the reporter.
And something clicked: compliments began decorating my articles rather than the dreaded red-inked edits. I began writing bigger profiles for the school newspaper, from a local student who competed in bicycle races in Europe to the importance of condoms. (I called them little preventers.) A few months later, our school newspaper mentor, Patty Shillington, hired me as a high school intern for our big local daily newspaper, The Miami Herald. My photo ran with each column called "Friends and Neighbors,'' which focused on unsung heroes in our community. I found myself writing all the time, for the school newspaper and for the real world one. I was a writer, a journalist.
Mrs. Comeau could have easily been one of the subjects of my newspaper column.
I found my calling thanks to a few simple inspiring words "You're a good writer'' and a suggestion. If it hadn't been for Mrs. Comeau's encouragement and Patty's guidance at The Miami Herald in my early years, I wouldn't have explored my craft and found my calling.
Twenty years later, I'm still writing new articles but I have expanded my craft by writing novels. And I teach journalism students whenever I can. In my lectures and when I grade their papers, I always encourage and hopefully inspire them to find their own voice. I also tell them what Mrs. Comeau told me so many years ago, "You're a good writer".
And that has been the best gift any teacher has given me. I want to keep passing it on. 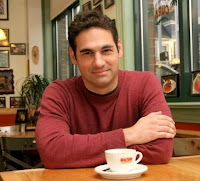 (The top black and white photo was taken by Miami Herald photographer Randy Bazemore when I began writing for The Herald's Beach Neighbors section when I was 16 years-old. Check out the suspenders and bushy curly hair! The photo ran each week with my Friends and Neighbors column for two years. A big thank you to Steve Rothaus of The Herald for digging that up for me.) The color photo was taken by Eric Hess at El Oriental de Cuba restaurant in Jamaica Plain for Beantown Cubans.)
Posted by Johnny Diaz at 5:30 PM