The Miami Manhunt Is On 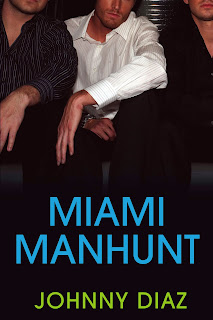 I'm happy to report that Miami Manhunt is officially out and appearing at a local bookstore near you. At Barnes and Noble, copies top the "New Fiction" paperback display table. At Borders, MM copies line the gay fiction shelf.

Miami Manhunt is my love letter to Miami. The novel celebrates the loyalty of enduring friendships and the love of a tight-knit Cuban family. I wrote this novel because I wanted to illustrate, in a light-hearted and fun way, the gay Latino experience in Miami, my hometown. The book also pays tribute to some of my favorite places in South Florida. The novel casts a nostalgic look at how the old Miami is fading with the never-ending carnival of construction cranes and northern march of gleaming skyscrapers.
If you're a fan of ABC's Brothers and Sisters or PBS's Que Pasa USA? series from the 1970s-early 1980s, then this book is for you.

Miami Manhunt follows film critic Ray Martinez in his pursuit of the romance he often sees in the movies he reviews. When he's not screening the latest Hollywood sequel (Miami Vice 2: Back to the Beach or Die Hard Already) for The Miami News, he's busy running errands for his Cuban parents in Coral Gables (caricatures of my own wacky and funny parents.) Or Ray is being heckled badly by his straight twin brother, Racso, a high school teacher with a perfect fiance. When Ray wants to escape his clingy Cuban family, he heads to Score on South Beach where he meets up with his two friends, TV news reporter Ted Williams and singer-songwriter Brian Anderson. Every Friday night, these three amigos check out the hottest guys streaming in and out of Score, not just a place but a goal.

For Ted, news never stops. Life is hectic as a TV news reporter and as the host of Deco Time, South Florida's version of Entertainment Tonight. This Portuguese-Irish guy from Boston also has a lonely heart that he tries to fill with the fame and celebrity perks his job affords him. Like Ray, he wants to meet that special someone but one reckless move on a Friday night may cost him everything.

Brian has already found an enduring committment with a wealthy and slightly older Israeli partner. The key to their open relationship: No hooking up with the same guy twice. But when Brian meets a hunky Puerto Rican waiter named Eros, it's a rule he can't help but keep breaking. Eros fills Brian's emotional, spiritual and physical center in a way that his partner never did. As Brian embarks on a journey of self-discovery, he expresses his feelings through the songs he writes.

Over the course of a year, these guys discover that love gets crazy, hearts get broken and mended and the only thing they can count on is their family and each other.

I hope you consider Miami Manhunt as a possible read. I wrote it from my heart and I hope you enjoy it as much I as enjoyed writing it. (The three narrators from Boston Boys Club make surprise appearances. I couldn't resist!)

To read the first few pages of chapter one, click here.


I'll be having some book readings beginning in July in Boston, Miami, Fort Lauderdale, DC and San Francisco. To check the dates and locations, click here.

And one more thing, welcome to the Miami Manhunt!
Posted by Johnny Diaz at 4:28 PM