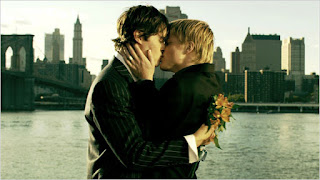 Does true love, a first love, last forever?
That's the guiding premise in the new film, "Between Love and Goodbye'' by Casper Andreas.
But the movie touches on other universal issues: binational couples, loyalty to family, the struggles of fidelity, and balancing career with relationship. All combine to present an endearing and sometimes dysfunctional portrait of the ups and downs of two young lovers.
The movie, which flashes back and then forward to the present, introduces a lovey-dovey couple - Kyle, played by Simon Miller, and Marcel, played by Justin Tensen. Kyle is the boyishly handsome lead singer of a emo band in New York City's East Village. 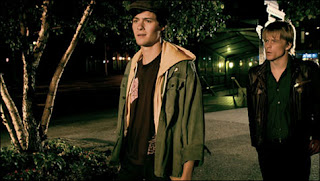 Marcel is the preppy and serious French aspiring actor. When they meet one night at a bar, they are smitten. Flirtatious banter ensues. They believe it's love at first sight. Tender moments between the men enliven the movie, bringing a realistic sweetness rarely seen in gay films. The viewer believes these two actors are just two guys enamored with one another: their onscreen chemistry soothes and sizzles. (It doesn't hurt that Miller looks like a raven-haired older Zac Efron while Tensen can pass for a younger and blonder Ethan Hawke.) As their relationship blossoms, they move in together and build a life as a happy couple. In order to stay in the US and obtain his green card, Marcel marries their mutual friend Sarah, a lesbian music store employee who steals almost every scene she appears in.
After the wedding, Kyle's sister April, a transgendered former prostitute, calls asking for a place to stay. Her arrival immediately presents several emotional and physical hurdles to the couple in love because April is codependent on her brother Kyle and knows how to manipulate him. April, who can't decide what gender she really is, doesn't just crash on their sofa: She crashes their love party. She dislikes Marcel and does whatever she can to spoil their honeymoon. She's the cobra in the one-bedroom New York apartment.
As the men try to balance their relationship with their burgeoning careers and April's disruptions, the couple's romance begins to fracture under the weight. This is where the movie begins to take an unexpected dark and twisted turn but one that many gay couples may have experienced off screen in their own lives. The gooey-and-sweet love between Kyle and Marcel that charmed in the first half of the film manifests into a spiteful, passive-aggressive War of The Pinks. You want to root for the couple but with each escalating episode - one involves domestic violence - you fear these two will never find their back to each other. Love, where art thou?
As Kyle, Miller brings a fresh vivaciousness to his character. Whenever he sings before a small crowd at the local bar, you feel the highs and lows of his relationship. 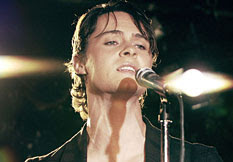 (His band's sound is remniscent of a gay Green Day.) As Marcel, Tensen exudes a quiet enthusiasm. He layers his performance with subtle nuances. He is tight-lipped and guarded as he falls in love which balances well against his free-spirited counterpart. Marcel fights admirably and desperately to keep the fading ember of their romance alive. The men are believable as a couple and their romantic scenes shine the brightest in the movie. They remind viewers of the potential as well as the innocence of young gay male relationships and what can possibly happen between love and goodbye.

(There will be a screening of the movie at 7:30 p.m. May 8 at The Brattle Theatre, in Cambridge, as part of the Boston GLBT Film Festival.)
Posted by Johnny Diaz at 10:22 PM