I'm not just a Beantown Cuban, I'm also a Miami TV news geek. I watch local TV news with a passion in both Boston and in my hometown, Miami.

I grew up in Miami when news matriarch Ann Bishop (Miami's version of Boston's Natalie Jacobson) led WPLG-TV Channel 10 in the 1970s and 80s. (she's featured in the billboard to the left.) I was there when WSVN-TV (Channel 7) went independent and introduced its flying graphics and thunderous rhythmic theme intro with Rick Sanchez and Sally Fitz manning the newsplex.

I was there when Speedracer reruns aired on former WCIX-TV Channel 6, which is now NBC6. I grew up watching a small but spirited PBS show called "Que Pasa USA?" which exploded into an international cult favorite. The show followed the daily challenges of three generations of a Cuban family, the Penas, adjusting to life in Miami in the late 1970s and early 80s. 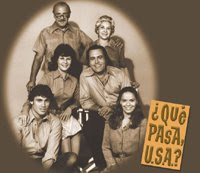 I was literally there when MTV descended on Miami Beach and taped The Real World Miami. (that's a whole other story.) And although I'm in Boston, I still tune into South Florida TV news. When I visit my parents in Miami Beach as I just did, one of the things I enjoy doing the most (besides cycling to South Pointe Park, running in mid-Beach along Pine Tree Drive or eating my mom's home-cooked meals and flan) is sitting in my childhood bedroom and watching Miami TV news and comparing it to Boston. Like other news fanatics, I scrutinize the color scheme of the graphics, the news presentation, the anchors and overall content.
In that spirit, I'd like to post each Friday a list of the most watched TV shows in Miami, the 16th largest market in the country. I do this each week in Boston for my paper. Since many of my loyal readers here on this site are from South Florida, I am hoping that this list may be of interest to you.
As you can imagine, Miami is predominantly Hispanic so the majority of the top shows tend to be Spanish-language, tu sabes, and mostly telenovelas. The shows that people watch in a market tell you something about the interests of the market itself. Actually, the list below reflects more of my mother's viewing habits because of the large amount of Spanish dramas.

Here's a look at the most watched shows in the 305 for the week of April 20-26.
Of note: Cristina Saralegui's Monday night interview show on Univision came in #17 with 146,000 total viewers. The most watched English-language drama last week was ABC's Grey's Anatomy which ranked #24 with 130,000 total viewers, followed by CBS's CSI, which placed #26 with 126,000. The venerable Sabado Gigante still draws a large audience Saturdays on Univision, ranking #19 with 145,000 viewers. No NBC show made Miami's top 30 last week.

source: Nielsen Media Research
Posted by Johnny Diaz at 10:53 AM