Writers' quirks, how some writers write 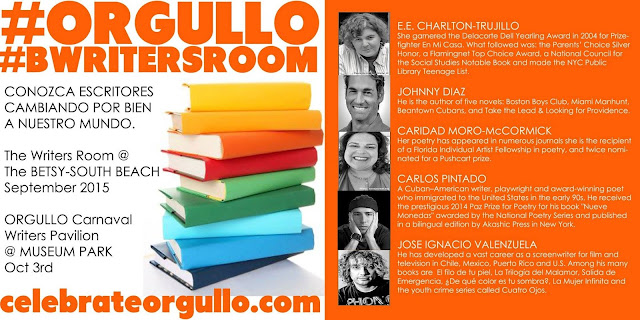 This past weekend, I took part in the Writer's Pavilion for the annual Orgullo Festival, which celebrates gay Hispanics in South Florida. It was a great bonding experience and it felt like we were all hanging out, sharing tips and experiences about our journeys in writing. Some of us have never met but after Saturday, I now feel a literary kinship with them.

After reading selections from our works, our organizer and interviewer Pablo Cartaya each asked us what was one of our quirks as a writer, what do we do in order to write. Everyone had a different answer and they were all entertaining as well as enlightening.

For writer and English teacher Cardidad Moro-Gronlier who read her short story Cuban Girls Don't Wear Tampons, she must take off her bra to write. She said it's about "comfort, not debauchery."

Speaking of getting comfortable...poet Carlos Pintado who read his poem Rome from his upcoming book Nine Coins, said he needs to take off his clothes to clear his whole space to write.  "I also drink a lot of coffee as well,'' he added.

For young adult writer and our host Pablo Cartaya, it's about music. His go to is Pitbull, Mr. Worldwide, Mr. 305 to get into the writing groove. Dale!

Also music driven is author E.E. Charlton-Trujillo who said she builds soundtracks for all her novels. "If I need to drop back into a scene, I have a song for that chapter or perhaps a particular character. That way, I can return to the mood and character regardless of where I am." She also has a habit of writing on anything from napkins to toilet paper.  (By the way, here's a trailer on her road tour to empower kids through writing.)

For Telemundo telenovela writer and author Jose Ignacio Valenzuela also known as Chascas who read a chapter from his upcoming novel La Posibilidad de Una Sonrisa (Possibility of A Smile), he likes to write in his pajamas with his shaggy hair all messed up. But he also mentioned that he loves pop music from the 1980s, 90s (Erasure, The Police), and that helps him set the scenes and build the character.  "Music is pure emotion,'' he said.

And for me (I read from from the first chapter of Looking for Providence,)  I wasn't sure how to answer the question. I find that writing anything, just a bit of dialogue, a few sentences or a small scene turns on the writing faucet. I could be jotting notes by hand in my notepad or on a laptop and it just pours out. I just need to write something and it builds from there.

I also find myself calling myself at work and leaving voicemail messages when I think of an idea or some dialogue for a scene so that I don't forget the detail.  I do this to the point that at times when I come to work Mondays, the red light on my phone alert me of new messages. When I listen to them, they usually start out with "Hey Johnny, it's you. Remember this line..."  Hey, we're all quirky, we're writers after all.

I also mentioned that having my traditional drink, a vodka with Diet Coke usually helps unleash some creativity. Not that I WUI (write under the influence) often but the times when I'm about to rewrite or revisit a chapter and I happen to have a glass, it adds a little something something to the writing. This may explain why most of my main characters drink some type of vodka variation.

One thing that was echoed by most of the writers was "to be fearless in your writing."  Because if you don't take a chance and put it on paper (or on screen), it can't be read and shared.

For you writers out there in cyberspace, what's your quirk, something you must do that helps you get your write on?