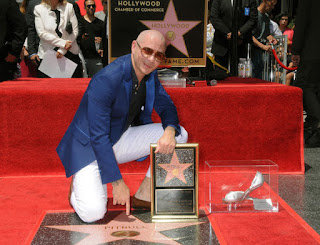 Pitbull is always on the move. Between this concerts, TV appearances, videos and whatever single his cooking up, Mr. 305 should really be called Mr. Everywhere. Recently, he was in Miami shooting a video for his new single Greenlight when I was able to chat him with on the phone for a story about two South Florida concerts and his work with SLAM! (Sports Leadership Academy Management) high school in Miami, West Palm Beach and Henderson, Nevada. He's the schools' celebrity ambassador. But I got to ask him which artists he'd like to work with since he's collaborated with pretty much everyone on the planet. To my surprise, he said Jay Z and the late Celia Cruz. Here's my story on Mr. Worldwide, whose real name is Armando Christian Perez.
Posted by Johnny Diaz at 1:18 PM