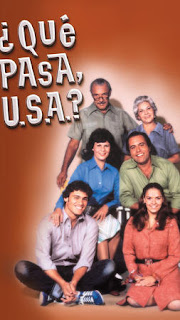 In the late 1970s, there was a bilingual PBS sitcom called Que Pasa, USA? that truly captured the Cuban-American experience through the fictional Pena family.  Every week on Miami's Channel 2, another slice of immigrant life was told through the multi-generational family of father Pepe, mother Juana, teen children Joe and Carmen, the abuelos, Antonio and Adela as well as their friends and neighbors.

The show is making a comeback of sorts, returning as a live stage production, Que Pasa, USA? Today...40 Years Later." I wrote a story about the show, its legacy, the soon-to-come updated stage version for 2018 and a where-are-they-now with the cast.

Only three of the original cast members are returning for the stage version:  Ana Margo who played daughter Carmen; Connie Ramirez who played Carmen's Cuban amiga Violeta and Barbara Ann Martin who played Carmen's all-American friend Sharon.  I was also able to interview Ana Margo in which she talks about playing Carmen again and the show's enduring legacy.

The show was part of my childhood in Miami Beach. It was probably the first show I saw that looked and sounded like my family.  The hardworking stubborn Cuban father; the mom who was mostly a housewife until she joined the workforce, the daughter who attended a private school and had to be chaperoned on dates; the Spanish-only-speaking grandparents who always chimed in with something old-school but funny to say.

And there was Steven Bauer (sigh) He played the sexy older Cuban son Joe who was always looking for another hot girl to date. 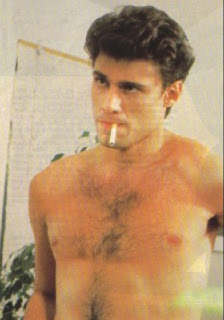 The show launched his career. He went onto a successful movie career that has included 1982's Scarface. He also starred in the 1985 romantic thriller Thief of Hearts and the music video of the same name by Melissa Manchester.

Although I enjoyed all 39 episodes of Que Pasa, USA and watched them with my family and friends,one particular episode has stood out over the years -  "Is Joe Gay?  That episode follows Joe as he starts hanging out with a classmate presumed to be gay who takes him to a dance club called Heaven.

The Penas become suspicious of this chico and they go undercover to the club to see what Joe has been up to. (By going undercover, the grandparents, parents and Carmen all conspicuously don sunglasses inside the club to much comic effect.) 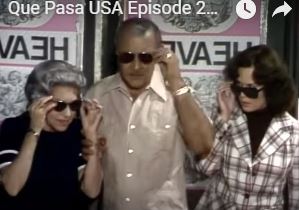 The show was ahead of its time in tackling taboo subjects from santeria and dating outside one's ethnicity to homosexuality.  I remember that gay men and women who were like that were often made fun of in Latin households or worse - not talked about at all. And here was a show in the late 1970s that captured all the different attitudes from the family members but with bilingual humor written so brilliantly by Luis Santeiro (who would go on to write for Sesame Street.) 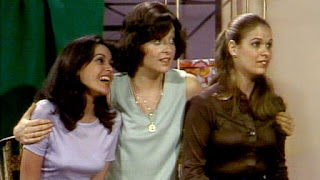 On a side note, the cashier at the nightclub (see her in the 21 minute mark) was my substitute teacher at the Head Start program at Biscayne Elementary School in Miami Beach. Her name was Caridad Villar (or Mrs. Villar as I used to call her) and she was an actress on the side. If you made it on Que Pasa, USA, you enjoyed some celebrity, at least in Miami.  And even today, my dad and I remember Mrs. Villar from that episode. And I think a lot of gay men and women who grew up in Miami probably remember the episode, too.

Below is the Is Joe Gay? episode.