I did it again. On Thursday morning, I completed my second Turkey Trot in Miami. For years especially when I lived in Boston, I remember my cousins and friends talking about the Turkey Trot, an annual run/walk that takes place Thanksgiving morning so you can build up an appetite for the big dinner.  Getting up at 6 a.m. to run a few miles at 7 a.m. with throngs of people in Boston's brrr weather never appealed to me.  Hiking weekend and holiday afternoons in the Blue Hills was more my speed. 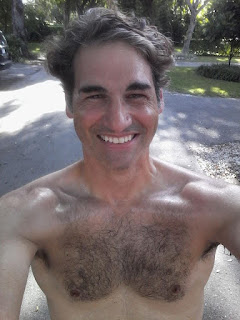 Four years ago,  I rediscovered a love of running. It was something I began doing my junior and senior year of high school but then stopped as I got older.  That all changed in April 2014 when I had  to pick up my sister's car at Mercy Hospital from my father's condo in Brickell. I decided, why not run it? It's only 2 miles or so. I remember feeling so energized and full of life (and extremely sweaty) after I ran it. Something clicked and reignited in me. From then on, I continued running every other day.  First, I'd run to Pitbull and Jennifer Lopez remixes on Pandora radio.  But after attending an Oprah Winfrey and Deepak Chopra meditation session at the AmericanAirlines Arena a few months later, I discovered their 21-day meditations. For some reason, I began running to the meditations. I still do. It makes 21 minutes or 42 minutes (if I do two back to back) fly by. My mind is centered, focused on the mantra and thought of the day even though my cardiovascular system is pumping fast and hard on all cylinders. I've been so relaxed in this meditative zone that I have gotten lost. (I have fallen a few times as a result.)  There is a freedom to running that makes you want to keep going and going. All my stresses seem to melt away during those 20 to 30 minutes. And whatever issue was bothering me before the run seems so distant, smaller, and clearer after my body begins to cool down.

Last year, mostly out of curiosity,  I decided to take on the Turkey Trot's 5K.  I loved everything about it. The building anticipation as the crowds gathered before the race.  Everyone jamming to the boom boom boom music and blaring sirens from the deejay at the starting line. And then finally taking off, bolting across the paths and trails of Tropical Park with a stampede of people of all ages. 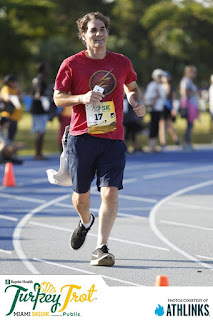 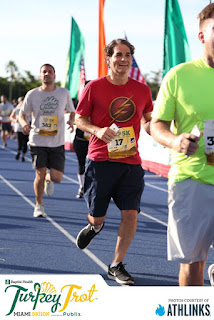 I ran to one of the Oprah-Chopra meditations that first time but their cool, calm voices didn't seem to gel with the frenetic energy from the pack of people all around me and the sounds of their feet pounding against the dirt and pavement. Still, when I reached the final leg of the run on the track, the FINISH banner beckoned ahead. Really nice strangers cheered all the runners from the sidelines. I smiled and pumped my legs harder and crossed the finish line. Everyone seemed to walk around in the feel-good after glow of the race. It was a group high. Then it was time to cool off and eat a banana. 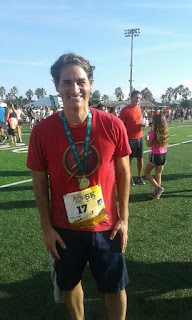 The race gave me such a good feeling of accomplishment that I decided to do it again this year. But instead of running to an Oprah-Chopra meditation, I played some up beat music (ABBA's Dancing Queen, Super Trouper, a Cuban dance song called Quimbombo and Prince's You Got The Look.)  Since I knew the route this time around, I ran it faster, weaving in between the other runners. I stayed on the outer edges of the crowds so I could have a clear path.  I felt like I was flying.  Whoosh! And once again, when I reached the track, I knew the end was near. All this good energy coursed through my body and fueling me to the finish line. Maybe it was the change in music or that I am now a better runner, but I surprisingly shaved off 2:20 minutes from my time last year. I plan to do the Turkey Trot each year from now on and perhaps some other runs. I'm learning that it can be fun to run with a group of strangers who all have the same goal, crossing the finish line.

Below are the photos from this year's run. I'm the one on the right :) 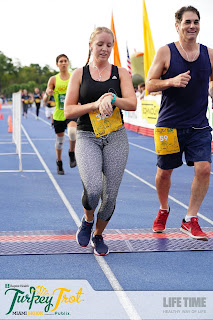 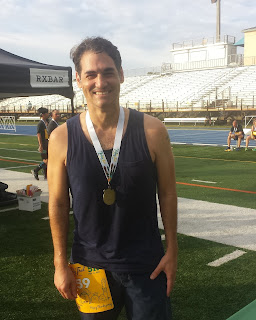