My Breakfast Club at Starbucks

For the past year or so, a little Starbucks in Coral Gables has become my unofficial hang out spot. When I became a member of the Sun Sentinel's Audience Engagement team, my shift changed to a school teacher's schedule, essentially, working 6:45 a.m. to 3 p.m.ish. That meant I had to get up at least by 5:45 a.m.  And the first thing I do is schlep two blocks in the predawn darkness under the Metrorail line to my neighborhood Starbucks at 475 S. Dixie Highway. 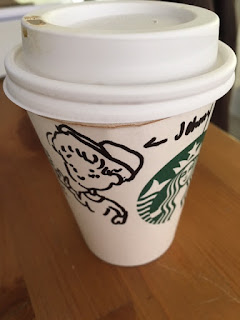 But what made my mornings easier was the staff here. I quickly befriended them and whenever I walked in, they greeted me with a cheery "HI JOHNNY!" or "JOHNNY's HERE!" even though my eyes were half closed. Over time, I got to know a little about each of the hardworking and super friendly baristas such as their families (a sick father in the hospital),  their interests (running, Mini Coopers, etc) , their other jobs (sea lion trainer) and whatever is on their mind that day. I'm also friends with one of them (Nat) on Instagram now (second to right of Alex below.) 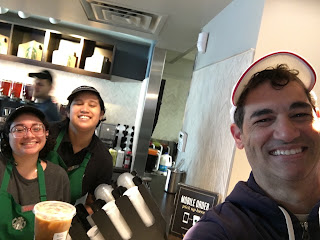 Each morning as I scanned the headlines, my Twitter feed, Google alerts and other channels that I use to find out whatever is trending or what people should be talking about when they start their day, I was starting my day at this Starbucks which became a pseudo office for me when I lose my wireless connection. When the store closed for two weeks last November for a makeover, I found myself cheating and driving to other nearby Starbucks. And yet the vibe was different. The warmth and camaraderie  I had come to know at my Starbucks wasn't entirely replicated in these nearby stores. The menu, coffee and food was the same but not the people, the experience.

A few months ago, I posted a Google review about this particular Starbucks shop and the staffers thanked me and told me that they have it pinned up on their wall by the drive thru window I also learned that two of the former and current employees (Neff and Alex) have also used it as a reference for other jobs which really moved me. The review was my thank you to them and their coworkers for their great service and I was pleasantly surprised that the review has done some good for them. (I was also pleasantly surprised when I spotted actor Christian Slater wearing a baseball cap stopping by one day last year to pick up his coffee from the mobile pick up area but that's another blog post for another day.) 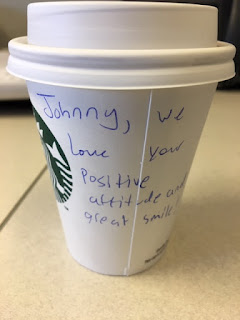 Below is the Google review that I posted.  Here's to my peeps at Starbucks in Coral Gables. And see
you tomorrow morning.

This Starbucks has become my other home. I start my day here in the predawn hours when the staff is always smiling and friendly even though it's dark outside. They know me by name and they know what I always order (butter croissant, doppio with one Monk stevia). They whip it up right away. It's always a treat to come here (which is daily). A big thank you to the wonderful, cheery and professional staff that I have gotten to know in the past year since I began coming here. I'm looking at you Nef, Elias, Alex, Kyle, Steven, Nico, Bri, Brenes, Nat, Ena, Roy, Mike, Chris, Josiah, Julie. (I know I am forgetting some names which means I need to get me some more espresso but I appreciate your hard work.)

PS. New faces have joined the shop since the review so thank you to Eli, Hannah for also brightening my mornings.