A Review of "Year of the Cock"


I wasn't sure what I was getting into when I began reading "Year of the Cock" by Alan Wieder.

For one, a rooster stares side-eyed from the book's cover. Was this about a bird?

I also went to elementary, middle and high school in Miami Beach with the author where we shared several classes including French, English and Journalism. We worked together well when he was my editor at our high school newspaper "The Beachcomber" our junior and senior years. Alan was a serious, whip-smart intellectual, a great writer and tennis player whose laugh I would hear from across our newsroom. I knew he eventually went to Columbia University in New York and then I lost track of him except for an occasional Facebook message about 12 years ago. 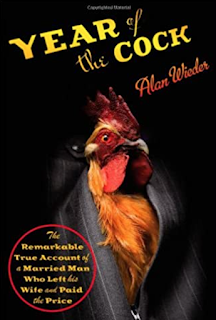 Years later when I learned about his 2009 memoir (which he noted is 87 percent true,) I was curious to find out what happened in his life after Miami Beach. I was not disappointed as I read the book in the Year of the Rat.

The "Year of the Cock" follows Alan's tumultuous mid-life crisis at the age of 30 in Los Angeles where he worked as a successful reality TV producer of hits such as "My Big Fat Obnoxious Fiance,'' "Joe Millionaire" and "Temptation Island."

It's 2005, the Year of the Rooster, and Alan was married to a lovely interior designer named Samantha whom he met in college. They had been in a committed relationship for 10 years including more than two years married. The book follows his decision to leave her so he can live the ultimate life of a lothario, boozing, partying and hooking up with younger women in L.A.

He lived in a fellow producer's fancy estate and then his own bachelor pad. For his new life, Alan bought a classic Porsche 951 and embarked on his debauchery while listening to gangster rap.

The decision to leave his wife was complicated, a mix of external family issues, an imbalance with the work-to-home-life ratio (Alan was working 14 to 18 hour days on his shows,) boredom and  resentments that built up over time.  The story is told through Alan's point-of-view so the reader doesn't really get to hear much of Samantha's voice.

Three months into his new bachelor life, Alan stood naked and looked at himself in the bathroom mirror and he became obsessed with his penis.

"My mind fulminated worse than ever with catastrophic thoughts about my penis, myself and my life such as it had become," Alan wrote in chapter 7.2. 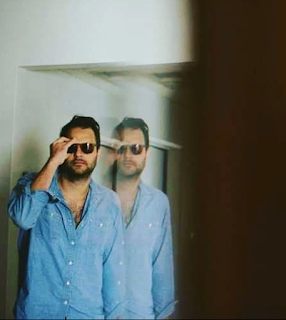 He then started experimenting with methods of PE (penis enlargement) which included weeks of rubbing, pulling, tugging, twisting, stretching, ouch! One method seemed to help grow it a bit. (For inquiring minds, he said he falls in the "above average territory" in chapter 6.0)

When the penis fixation became all too much, Alan turned to a psychotherapist who gave him the tools to deal with the penis craziness, the "issue of inadequate self-identity" and the factors that led to the marital troubles with his wife (and then trying to make things right.)

In a funny way, the book serves as the ultimate thesaurus for the word penis. I never knew there could be so many words for it but Alan found or came up with them.  They include schlong, pong, pecker, dong, snorkel, pisser, rod, blood bomber, wang, sword, and of course, cock (and the list went on and one and so did the pages about his penis paranoia.)

The book is an honest, entertaining look at how Alan got his groove back and how he began to work on himself mentally and emotionally, with help from the therapist and his childhood best friend, producing partner and actor Steve Sobel (another classmate of mine from elementary, middle and high school.)

While it was hard to read about Alan drinking, hungover, partying and ignoring his wife's calls for months, I appreciated his love for his amigo, his consorte, his compadre.  Both grew up as Jewish kids in Miami Beach. And reading about those flashbacks about their many firsts and North Beach Elementary oily pizza square lunches brought back some of my own happy childhood memories.

The scenes with Steve are funny and sweet and they lighten and carry the book: Two pals who know each other inside and out and support one another, no matter what. As Alan leaned on Steve in figuring out his new bachelor life and his penis-obsession, Alan too supported Steve as he wrestled with his jitters about getting married to his longtime girlfriend Marita.

Steve generously gave Alan some of his old furniture for his new bachelor pad and gladly helped him move using his Ford pickup. Alan organized a fun and simple bachelor party in a cabin in the woods and nailed his toast at his wedding. There is a real love there and their scenes could have easily been part of a reality TV show all together or the basis of an Adam Sandler movie.

Maybe the book should have been called "Year of the Friend" because that's what I took away from it, that no matter what happens in life, having a good friend by your side can make all the difference, especially during an early mid-life crisis or while creating a reality show.

P.S. Alan has another book, a collection of sketches of girls he has dated. It's called "Exes."