Jenny is an adventurous 13-year-old who dreams of being a novelist.  When she's not riding her bike and spying on her neighbors in her Virginia town in 1958, she's jotting down scenes and ideas in her notebook for her later novels.  During one of her spying escapades, she discovers that her lawyer father is having an affair. Does her socialite mother know? How long has this been going on?

The discovery of the affair sets off a series of events that will take the family on a healing road trip to to Key West in Lee Smith's novella "Blue Marlin," the name of the motel where the family stays. Ms. Smith brings the reader on the road as the family drives through Florida, Miami and finally, the Keys.

For anyone who has enjoyed the trek to Key West, the book serves as a mini-travel guide. The reader sees what the city was like in 1959 through the eyes of a teenager experiencing it for the first time.

"But I loved that final part of the drive, with the luminous sea and sky surrounding us and the Keys with their wonderful sounding names: Key Largo, Cudjoe, Sugarleaf, Saddlebunch, Raccoon," Jenny narrates in the final leg of the trip. 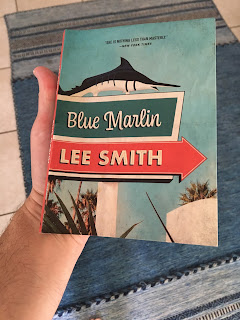 The book is told through Jenny's point of view, as if she's sitting next to you in the lobby of the Blue Marlin and chatting away about her parents during their month in Key West.
As Jenny explores the island on her own and performs a daily good deed, she makes some keen observations about the carnival bustle of Key West where "everyone seemed to have all the time in the world" and "old frame houses covered and sometimes hidden by lush vegetation."

To Jenny, Key West was where the "the light was green and golden" and the city was a "disorienting, a bright buzz of color and noise."  Her descriptions are spot on;  her narrations are mostly fun and yet sad at times as she sees the chasm between her parents because of the affair. She realizes that she has become the glue to help her parents patch things up.

But Key West can be a "geographical cure" and it just so happens that the Hollywood movie "Operation Petticoat" with Tony Curtis and Cary Grant is being filmed in town. The cast is also staying at the Blue Marlin, a motel "that was made of blue-painted concrete, two stories in a U shape around a good-sized pool featuring a diving board and a water slide and lots of lounge chairs and palm trees."

Ms. Smith writes with heart as she describes Jenny and her mom enthusiastically watching the actors dive into the pool and talking on the phone in the lobby. Ms. Smith also captures how Jenny befriends some young friendly Cuban female dancers who paint her nails and keep an eye on her. I won't spoil the ending but it involves a lively big submarine scene from the movie and the family gets to help.

"Blue Marlin" is a short read (123 pages and the book fits in the palm of my hand) but Ms. Smith's descriptions of everyday slow-going Key West life makes the novella a charming, breezy summer read.